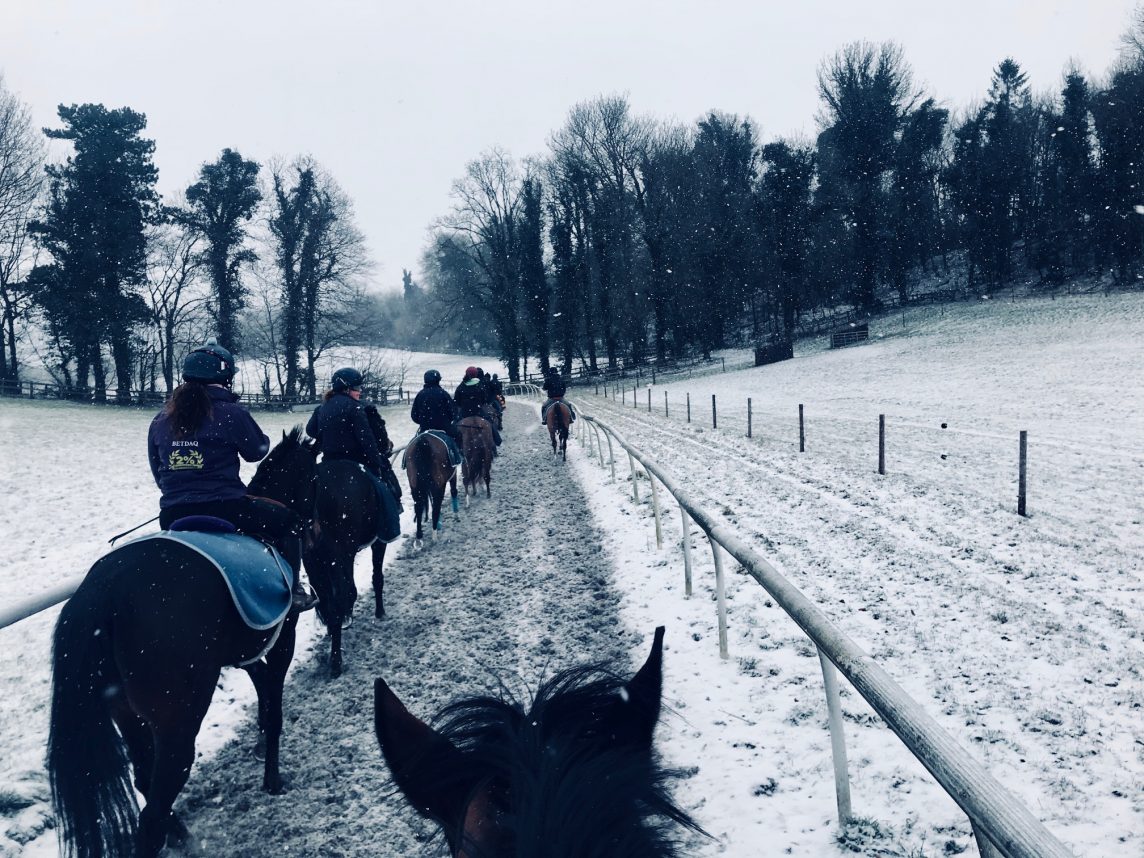 Winter returns – but it’s meant to be spring!

With all jump racing abandoned lately due to snow, ice, and the aptly named Storm Emma it seemed a perfect time to update our blog. It really has been bitter, but we have managed to keep everything going and as ever full credit to the team.

We haven’t had a huge number of runners, since our last update, however, Balibour has kept improving and ran a super race to finish second at Sandown (16 Feb). Our conditional jockey Patrick (Paddy) Cowley continues to get better and better as the season has progressed and rode a super race on him to only be beaten by a length and three quarters. I think we will see the best of Balibour once he goes over a fence, but he has come a very long way this season.

On the same day however, Mosspark blotted his copybook once again and is heading off for alternative employment! He has such natural ability but not the desire to use it, so I think we will all be happier to see him in the hunting field. The Sweeney also ran a nice race at Sandown, finishing behind two extremely well in and well handicapped horses. He travelled and jumped and seemed much happier over two and a half miles.

I then headed up to Haydock (17 Feb) with De Rasher Counter, having debated whether to run him in the graded novice or the Pertemps qualifier. As it happened I ran him in the Pertemps and he just travelled too strongly on the unbelievably soft ground and didn’t see the trip out. In fairness he would have had to have been versatile in the extreme to be able to finish second over two miles on good ground at Doncaster and still be able to compete off a mark of 140 on bottomless ground in a three-mile race at Haydock in the same season! We will find a nice race for him before the end of the season, but he, like Balibour, will be a nice horse over fences.

We had a winner for the third Saturday in a row with Fortunate George who did the business at Wincanton (17 Feb). He again was ridden by Paddy, and although at one stage it looked a little unlikely he came through to score by a comfortable five lengths. Although George had given us a fantastic day when winning over fences earlier in the season, I know Barry just felt he spent too much time in the air at them and having discussed it we felt it would be better for him to go back over hurdles. It was a good decision as it was a nice race to win, and he gave his team of owners a great day out – what a star he is!

Belle Empress headed to Lingfield (19 Feb) where the ground was barely raceable. She stepped up on her debut at Newbury and finished third, she jumped very well and was far more settled, so I think she will continue to go in the right direction.

For the first time in a long time, having taken three runners up to Doncaster (21 Feb), we failed to come back with a winner! In saying that, I was very happy with Rooster Cogburn who finished fourth in the bumper and Demographic who was returning to the track after a long lay-off. The ground would have been softer than ideal, and he got tired in the last few furlongs, but he jumped beautifully and travelled strongly and there will be races to be won with him.

Fox Appeal on the other hand, ever though he is eleven, can continue to surprise us! Running in the veterans chase he jumped off keenly and found himself in front and basically took control and ran at a two-and-a-half-mile pace over a three-mile trip – naughty Foxy! He couldn’t sustain it and Nick Scholfield very sensibly pulled him up. He came back bucking and kicking and will be back out again once this snow disappears.

Probably the horse that pleased me the most over the past fortnight was Shotgun Paddy who ran an absolute stormer in the Devon National at Exeter (23 Feb). Having jumped as well as he ever has, he just slightly missed the last and finished second beaten only two lengths. It was lovely to see him out on the track with his ears pricked loving his racing. It really does show that a bit of hunting can massively sweeten a horse up and we were extremely grateful to Ryan Bliss for taking him out for a few days. By all accounts he was a natural and will give him a job when he retires.

I was also very pleased with Vibrato Valtat running in the Betdaq Chase at Kempton (24 Feb). When the race is run at that tempo he probably doesn’t quite stay three miles, as he travelled into the race with every chance at two out, but just didn’t quite get home. On that running there is a big handicap still in him, and once we find the right race I think we will get his head back in front.

It has been a hard week with all the snow and ice and it has definitely made a huge amount of extra work.Therefore, we are very glad to see the back of the snow and the return of spring – who is here to stay!