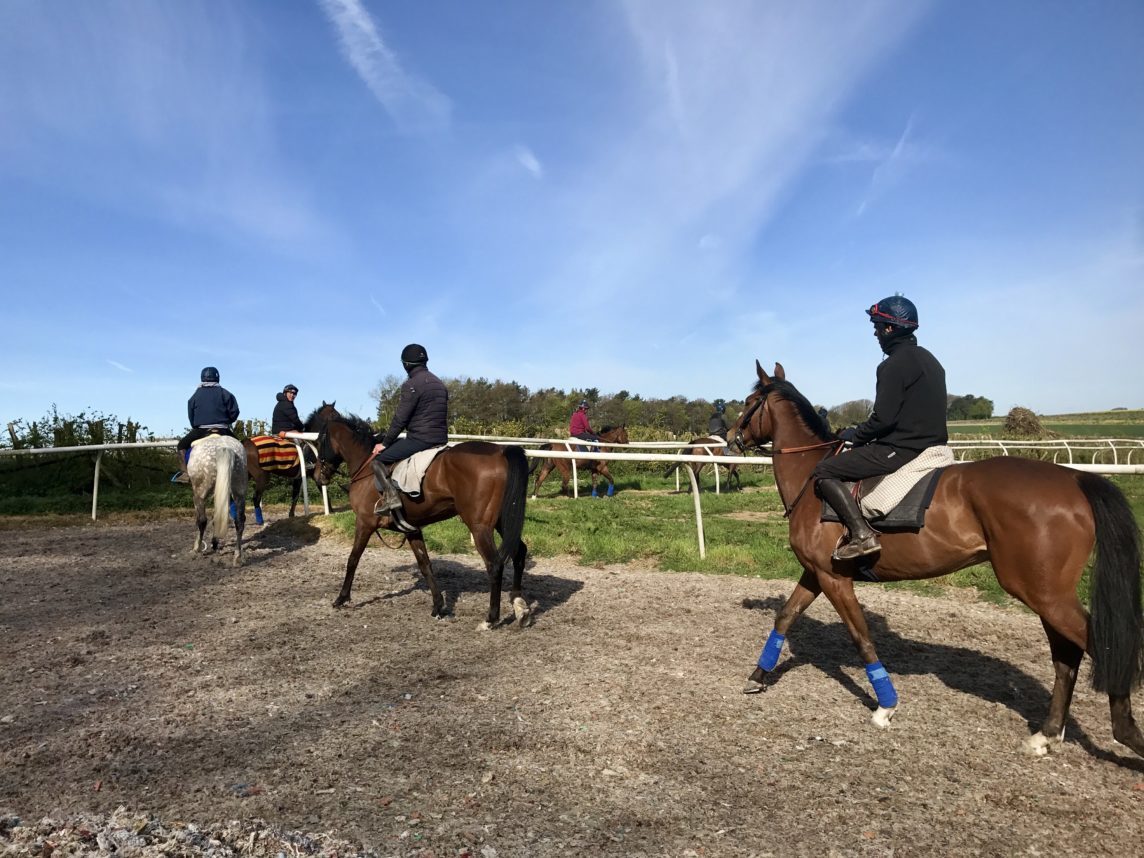 After a quiet week prior to last Saturday, there is no doubt that runner wise things have taken off. And, with most of the horses in such good order its been the right time to be running them.

The only horse who really bucked the trend is Onderun, who went to Haydock last Saturday for the Challenger finals day in the hope that better ground would bring him back to form. As it happened he just couldnt go fast enough and eventually pulled up. His next date will be the Doncaster sales, where he will hopefully find a lovely home as he will make someone a fabulous point-to-pointer. He is very honest and straight forward and has given us some fun days racing.

Fortunate George also went up to Haydock off the back of a great season. He ran really well but missed the last completely and although it didnt cost him the winning of the race, it probably cost him a placing. Hes come home fine and will have a well-deserved break before going novice chasing next season.

I think the Challenger Series has been a great innovation as it offers the middle tier horses the chance to run for serious prize money and reward them for consistency. It is a series I hope continues for many years to come and The Jockey Club deserve plenty of credit for this.

On the same day, down at Newton Abbott Fox Appeal delivered once again. It is his eighth career success and has taken his career earnings to 150,000 what a complete super star he has been. He jumped beautifully under Nick Scholfield and won nicely. It was his ninth run of this campaign and it was our thought to turn him away now as he has been so busy, but as he has come out of the race bucking and kicking, we feel there maybe another option to go back to Newton Abbott in May, and then I have promised him he can have a break! We are not rushing into that, but if everything continues to go the way it is with him, at the age of ten there seems no point turning him out if hes still keen to go to the races. He is a serious character and been a great flag bearer for us over the years.

We had a wonderful Easter on a personal level as we managed to get all the family together on Easter Sunday, including the Australian contingent so there was much noise and chocolate – from a racing point of view the horses could not have performed better Monday and Tuesday.

We took four to Chepstow on Monday, all with varying degrees of chances. Swatow confirmed her promising performance at Southwell, by running a super race to finish second behind the short favourite Copper Quay. They didnt go much of a gallop and then sprinted, which probably didnt suit but I was still very pleased with her and feel she is a mare we will have plenty of fun with.

Vendredi Trois was just a little bit gassy through his race and never really had a chance to fill up his lungs and will certainly come on for that experience. Pawn Star then ran in the feature race and jumped beautifully and travelled very well. Sadly when he jumped to the front at the last fence, he pricked his ears and felt he had done enough and just got run out in the closing stages to finish second. I was absolutely thrilled with him even if he was a bit naughty!

Majestic Moll ran in in the first division of the mares bumper. Her form had been great and she has done nothing but improve and she won in the way that we hoped she would. She travelled and quickened and did it very easily. We have done plenty of schooling at home and she absolutely loves jumping so I cant wait to see her next season, when she will go and jump a hurdle. We are quite excited about Molly and being part owned by father and Nick Mustoe, its always good for family relations to keep them happy!

We then had four runners at Kempton on Tuesday. Talent To Amuse looks like another decent filly. They probably didnt go fast enough for her early on in the race and so she was a bit lackadaisical with her jumping, but was very good down the home straight and winged the last to win cozily. She will only get better and I think a step up in trip will help her. Shes two from two now and I think could be very smart for us and Thurloe Thoroughbreds next season.

Mr Mountain made his debut over fences and had jumped very well early on until coming to the third last, where he jinked left, and Aidan put his weight right and his saddle disappeared and so did poor Aidan – however they both returned unscathed and the horse will be out on the track sharpish and the jockey went onto ride a winner at Ludlow the same evening, so they didnt come to much harm despite their antics!

Set List and Caulfields Venture then ran in the three-mile handicap chase. In fairness Kempton is probably a bit sharp for Caulfields at that distance, but he jumped with enthusiasm and once he returns to his beloved Exeter I am sure he will be back to winning ways. Set List also made a return to the track after a winter break. He is usually a horse that does need that first run but he did well to finish second, he had a good blow after it and should come on. I think we could have a nice summer with him, he loves the good ground, is a solid jumper and I think will be suited to a big galloping track. Considering the dry weather we have had over the last few weeks, Barney Clifford of Kempton produced beautiful ground in difficult conditions, but hopefully we will get a drop of rain soon to make everyones lives that little bit easier.

Our most recent runner was Casino Markets at Cheltenham and what a total star he is. He jumped superbly in the best race he has run in yet and stayed on all the way up the hill to finish a gallant third beaten just over four lengths. He has just got better and better and is an absolute joy to have in the yard as he never stops trying.

Its not long now before the end of the official season and although we will have a few for the summer season, we have started to ease off the work with a lot of the horses and are getting them ready for their summer holidays a drop of rain for grass growth and a few degrees warmer and everyone will be happy!