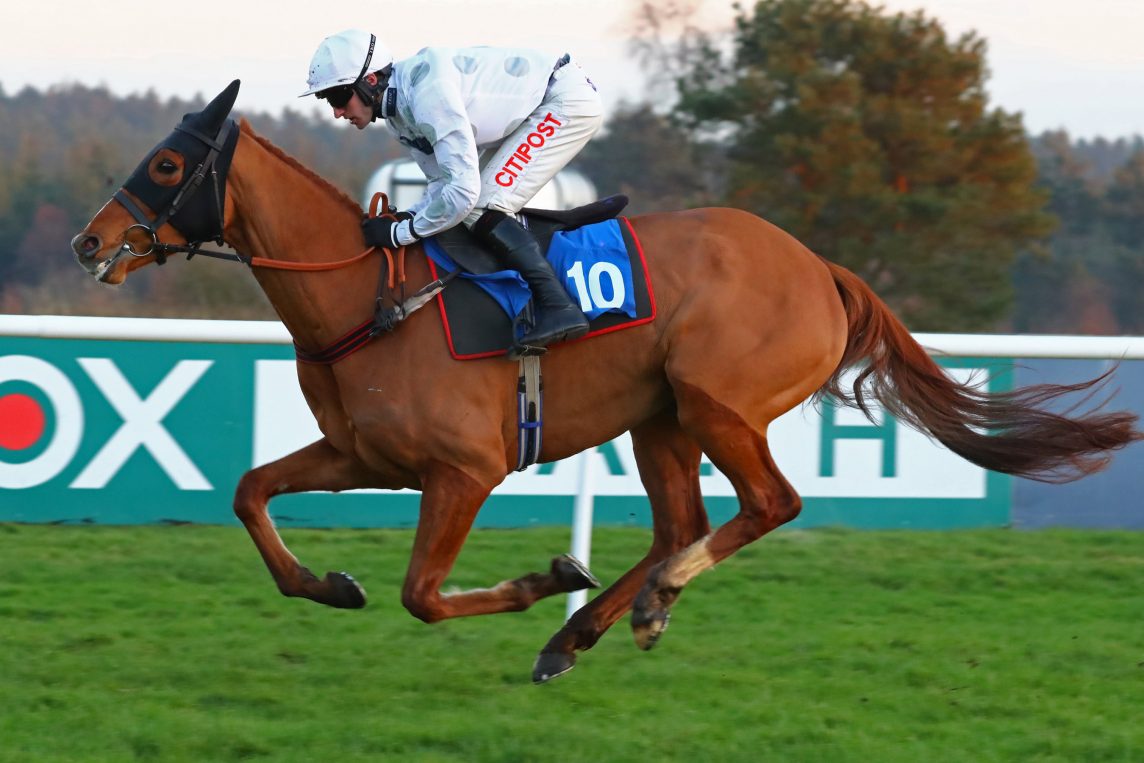 Plenty of promise across the board

As ever at this time of year it seems I am apologising for not having done our blog – I do not know where the times goes, or I do – there just never seems enough of it! It has been a very busy time of late, which in the main has been successful, and that has definitely kept a smile on the faces of everybody here.

It makes sense to start with Paisley Park, who really is gathering quite a following.  It was well documented that we were due to go to Ascot after Newbury for the Long Walk Hurdle, but we really couldn’t take the risk of running him there on what we felt were false patches of ground down the far side after all the rain.   We were very sorry to let his fans down and obviously Andrew, but once we had seen the ground it was a very easy decision for us to make on behalf of Paisley.   Therefore, we waited for the Cleeve Hurdle on Festival Trials Day at Cheltenham last month and he did not disappoint.  He is getting more and more professional in his racing and, for us, we felt it was his most impressive performance to date.  He absolutely loves it: the attention, the getting to the front and then teasing us and playing with his opposition, as soon as I see those ears go forward you know he is in control – roll on Cheltenham in March where hopefully he will be doing the same again.

After winning the Ladbrokes Trophy we had hoped De Rasher Counter might just step up to being a Gold Cup horse, and by running him in the Cotswold Chase also at Cheltenham it seemed liked a sensible place to see if that hope could be realised.  He travelled and jumped well on the first circuit, but as the pace lifted he made a significant error that just knocked him out of his rhythm and he could never land a blow after that.  He stayed on all the way up the hill, on ground I don’t think he really enjoyed, to end up only being beaten a short head for third, but nonetheless it was not a gold cup winning performance and so accordingly we’ve taken him out of the race.  For any of those big races you never want to go thinking you are just making up the numbers and with plenty of nice races around it made sense at this stage of his career to not be tackling a race as competitive as the blue ribband event.  We did not enter him into the Grand National either as we just felt it was a year too soon.  He is only eight and I think a bit more experience over fences will not go amiss and it is something we will leave until next year when he will be stronger and more mature.  Looking at options we might go to Uttoxeter for the Midlands National or possibly the Betfair Bowl at Aintree where the flat track and conditions of the race should suit him.

We had quite a few graded race runners over the Christmas and New Year period with varying degrees of success.   Éclair Surf ran in the Challow Hurdle at Newbury (28 Dec), but he was just not ready for that level race at that time and ended up falling at the third last. He was absolutely fine and we will look to run him in a novice hurdle with a penalty, while the ground is soft, before the end of the season.  However, our eyes have always been on chasing with him, he is a big scopey gorgeous horse and so we can’t wait to see him running over fences next season.

Hang In There ran in the Tolworth Hurdle (4 Jan) on very soft and sticky ground, typical of mid-winter conditions at Sandown.  He is such an easy moving horse that skips along the surface and he just couldn’t get his feet out of the ground, he travelled well when it was a bit better down the back, but in the worst of the conditions coming up the home straight he just couldn’t manage it and so Aidan Coleman looked after him and he finished fifth.  I then ran him in the Sidney Banks at Huntingdon (6 Feb) where he travelled superbly until two out where he came under pressure and clipped the top of the hurdle and came down.  I am very pleased to report he is absolutely fine, but it is such a shame as I expect he could have been second giving 6lb to Shishkin the current favourite for the Supreme Novices at the Festival.  He is such a lovey horse and I hope gets rewarded again later in the season.

What is always important within any yard is that you have a good cross section of horses, with some more experienced, some handicappers and some youngsters coming through and that is certainly what we have here.  The youngsters are the future of the yard and what has been exciting for us is that we have run three bumper horses in the last six weeks all of which have won.  We are not about galloping the youngsters at home, so it is pure natural ability and having them fit enough to do themselves justice on the track.  The three that have run should make up into nice hurdlers next season and ultimately chasers.  Red Rookie (main photo by Matthew Webb) was the first of them who won at Exeter (21 Jan).  He is a gorgeous big Black Sam Bellamy horse who does on occasions have ideas of his own on which direction to go in and how fast he wants to travel there! At the races though he was unbelievably professional, and he handled the soft ground and galloped away from what I think was a decent field.   He looks like he has a bright future and is one that we are very excited about. He will probably have one more run before the end of the season in another bumper, but his future definitely lies over obstacles.

Runswick Bay is a very kind horse who does everything that he is asked to do.  He is a lovely mover with a super attitude and just gets on with the job and that is exactly what he did at Wincanton (30 Jan).  He travelled easily through the race and when Ben Jones asked him to quicken he did, and when he got to the front I think he wondered what he was doing there as he looked very green, but all he wanted to do was respond to the questions he was being asked.  He is a smashing jumper at home and like Red Rookie will probably have one more run before being put away and then go over hurdles next season.

Hoi Polloi was our third bumper runner who again was a very impressive winner at Kempton (7 Feb). It was a slowly run race with all the horses still in a group in the latter stages, with Hoi Polloi and Adam Wedge trying to find a clear route through. He tried to come up the outer but that was blocked, then the middle and then they eventually found daylight up the inner and he quickened up impressively and won going away.  There is no denying he was an expensive purchase at the store sales, but what has been lovely is to watch him mature, develop and blossom and reward his very loyal owner Nick Mustoe by winning like a good horse going forward.  The one thing that these bumper horses have in common is that they are all five years olds, and by just giving them that extra time they have all rewarded their owners and for that we are very grateful.

ManoftheMountain is another horse where time and patience has made such a difference, and after two wins earlier in the season before a silly unseat, he too came good when winning a novice handicap chase at Taunton (30 Dec) very impressively.  He is a horse that I am convinced would suit better going, but even on the soft wet ground that day he was still well ahead of the field. He is a great jumper, has a wonderful attitude and is an absolute pleasure and having had a nice break after that he is back in work and ready to have a look at some potentially bigger targets in the spring.

Talking of patience, the award for this month goes to the owners of Fortunate George.  He has been wonderful for them over the years, but he had very much lost his way and interest in the game.   I think that jumping fences possibly knocked his confidence and although he gave us a wonderful day in the sun at Ascot in a valuable chase, he probably lost his bottle jumping the big ones and it has taken time to get that racing desire back again even over hurdles.   With our conditional jockey Henry riding him, bit by bit you could see his enthusiasm start to come back and each run this season has got better and better.  James who manages the syndicate suggested taking the head gear off him and I think that was the right call, and he rewarded everybody by winning at Warwick (9 Feb) as well as giving Henry his first winner, and a day that nobody will forget.  Judging by how George is prancing around the yard at the moment I think he really is back loving it, and we are very grateful to the syndicate who have remained loyal to George and gave everyone that opportunity.  A true team effort and a job well done!

Belle Empress is another horse that has taken her time to find her niche, but true long-distance staying handicaps are definitely the answer, and her victory at Exeter (6 Dec) over three and half miles was a great day for all concerned.   She is a super jumper and epitomises the stayer.  She followed up with a very good fourth in the Sussex National at Plumpton (5 Jan) having had a slightly rough passage through the race and she will now head for the Devon National later this month.  There is a physical limit to the number of times a stayer can run through the season due to the distance and bottomless ground that we have been encountering this season, but she has started to reward her owners and given everyone great fun.

We have had plenty of placed horses with the likes of Shang Tang, Thunderstruck, Killer Clown, Silent Assistant and Dagueneau all running well, and we have plenty more still to run, so there is no doubt there are exciting times ahead. Looking at our entries I think we are likely to have very few going to the Cheltenham Festival but will have a bigger team heading to Aintree – the races at both are always unbelievably competitive but with Punchestown coming hot on the heels of Aintree you sometimes get a slightly ‘easier’ option at Liverpool – here’s hoping!