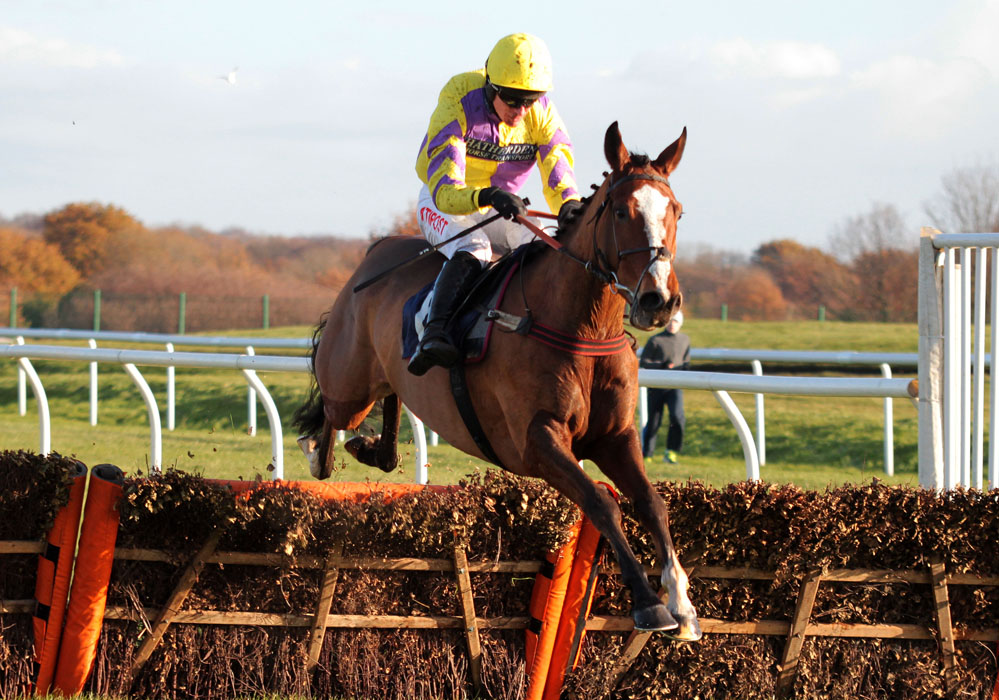 The horses have been fantastic over the past couple of weeks which has created a real buzz around the yard.

The end of November finished off as strongly as the start of December has been, with Full Irish winning the £20K chase at Lingfield (28 November) barely coming off the bridle. He really does love uber-soft ground and stepping him up to three miles was a great idea from Barry. I had been concerned that last year he wasn’t quite finishing out his races and I felt dropping him back in trip would make more sense, however Barry has been riding him every day and felt he had started to settle and ride more like a three-miler. He could not have been proved more right, as Full Irish was very impressive, jumping beautifully, of what there was to jump, as all bar one fence was removed in the back straight due to low sun! What was in front of him he was very good at and as-long as the ground is very soft there should be plenty more races for him to win.

Ladbrokes weekend at Newbury or two days at Doncaster? Obviously the latter when Newbury is just down the road! Doncaster has been a very good track for us, it provides decent ground even in the depths of winter and is a proper galloping track so we sent some nice horses up in that direction.

On the Friday (1 December) Enniscoffey Oscar (photo by Tony Knapton) went there and ran in a 2.5-mile novice hurdle. He had improved so much from his run at Kempton and routed the field by 15 lengths. He never missed a beat with his jumping, is as tough as nails and as honest as they come. He wouldn’t want the ground too soft, so we will try to find somewhere for him to go over the Christmas period and then look at the River Don back at Doncaster at the end of January. Vibrato Valtat did stay closer to home at Newbury and ran in the valuable 2.5-mile chase. He also ran a stormer to finish fourth and he heads up to Doncaster this weekend to run over three miles for the first time. I think his last run suggested he might just get further and he could just be getting himself dangerously well handicapped!

Saturday (2 December) morning for me was spent on the road back to Doncaster with several nice horses. Irish Prophecy has always been held in very high regard by us and up until this point never really had a race to win. I think the experience opened his eyes and ours, and he probably just wasn’t as far forward in both maturity and fitness as we thought. The field crawled and then sprinted and although he jumped well, he came there to deliver his challenge and was just not able to sustain it all the way to the line. Leighton was pretty easy on him when he knew he wasn’t going to beat the winner, Kalashnikov, who is obviously very good and all of us have learnt a lot on what Irish Prophecy needs to be doing. He’ll run over Christmas but at 17 hands and only four years old, he will only get better with time.

Having been a little bit down at the mouth after Irish Prophecy was beaten, Majestic Moll saved the day by jumping with her usual accuracy and enthusiasm and beat a decent field of mares to win the following race. Equilibrium restored!

Chelsea Flyer has just not quite delivered to date this season and having had a few issues with his feet, I am hoping that we are not to far away from getting him back on track. Barlow ran nicely to finish fourth, but probably didn’t quite get home over the extended three and a quarter miles. And, I was delighted with Shiroccan Roll’s debut run, being beaten just over five lengths. He is a lovely three-year old who should have a very bright future.

Junction Fourteen also ran a super race at Newbury, staying on for fourth. He jumped as beautifully as ever, but the ground was too slow for him. He will now wait for the better ground in the early spring, when I also think he may have himself on a decent handicap mark.

Not Normal also made his racing debut travelling all the way to Bangor for a bumper. He was a bit keen early on and Nick Scholfield did a good job of settling him, but once he got the hang of what this racing game was about he finished very strongly to finish third, after suffering a bit of interference. By all accounts it was a pretty decent bumper with lots of people being very keen on their horses. Not Normal is beautiful and if he can build on this run, he can hopefully get his head in front next time.

Sunday (3 December) saw a trip to Leicester to watch High Noon and Fox Appeal. High Noon is a fine big chasing stamp and having run well at Chepstow, on the face of it he was disappointing at Leicester. But in fairness to him, he is still very raw and was just too immature to handle that sort of ground on the hurdle course. It was very holding, and he just couldn’t get his feet out of it, in time I think he will enjoy that ground, but for the moment he is just too much of a baby and a next year horse. Foxy ran another corker to finish second in the veteran’s chase. What a star he has been for his team of owners. As long as the ground is not horrendous he will go to Sandown for the veterans chase final in January.

Having had a few days where pretty much everything finished in the placings it was a trip back down to earth at Haydock and Ludlow (6 December), where we gained letters rather than numbers! Buster Thomas fell at the last at Haydock. It was very holding ground and he just got tired and crumpled on landing. He has come out of the race fine and unscathed and just needs to learn not to be such a bull in his races and let the jockey tell him the speed and when to jump rather than taking matters in to his own hooves! Hopefully his fall may stand him in better sted for the rest of his campaign. He is a horse I regard highly and I think will come back with a vengeance.

At the other end of his career, Caulfields Venture honourably retired at Ludlow. He has been such a fantastic servant, who loved Exeter racecourse. Sadly, he didn’t get a chance to run there this season as the ground had been too soft this Autumn, but we went for a last run with him at Ludlow. During the race as his jockey tried to make him go faster, Caulfields had his ears pricked saying you must be joking and so we decided it was time to call it quits while he was still in one piece. He is ecstatic to know that Laura, who has looked after him for the past four years is going to keep him in his retirement. He already has more clothes in his wardrobe than I do so I think he will enjoy his dotage!

I was thrilled for Paddy, our conditional jockey, when he and Flemcara recorded their second win together of the season at Exeter (8 December). Flemcara was extremely impressive jumping and winning as he liked on ground that was unbelievably testing. He was the only one that was on the bridle coming to the last and won very nicely. He is very much on the upgrade, but might well have to be with the handicapper putting him up 10llbs.

The weekend saw a trip to Chepstow (9 December) where I Am Sam jumped and travelled well before tiring in the ground. The Sweeney ran a lovely race to finish third in the novice hurdle. And Shotgun Paddy said “Really? three miles is just not far enough for me anymore”! and finished with purpose to be only beaten six lengths, having made up a huge amount of ground in the home straight, with the race just finishing to soon. He is coming down to a mark where I think he could be extremely competitive and I’m looking forward to getting him started in veteran chases when the ground is very soft.

Mythical Legend ran a stormer first time out in nearly 600 days at Fontwell Park (11 December). She finished third behind a couple of decent mares on very wet ground. She has thankfully come out of the race well, so I am looking forward to getting her back out. She is a beautiful mare and it hopefully won’t be long before she gets her head in front.

The snow arriving here at the start of the week was definitely unwelcome and -7 the following day did not make my mood any better! I am very pleased to say that things have improved considerably and we were back on the grass this morning so I am very much hoping that the winners will continue to flow….