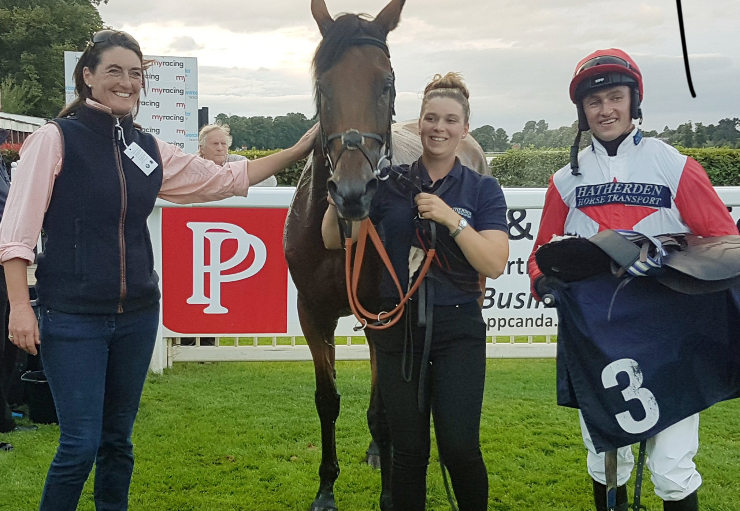 Moll is majestic winning at Worcester

As ever through much of July and the early part of August we are rather quiet as far as runners are concerned, but it is an unbelievably busy time for us at home.  All the horses that have had fantastic summer breaks have now come back in, and so the season begins.

Apart from being a little fresh and with manes flowing when first back in, the horses have settled very quickly into their routine.  The addition of our new round sand gallop has proved invaluable, with all the fresh horses working out early on that the sooner they knuckle down the easier it becomes – the soft sand sobers them up quickly! Just looking at them and how much they are doing, it seems to have bought forward their fitness, and they seem to be well ahead of where we would normally be at this time of year.  Now what we need is for the rain to start to fall, but hopefully just at night!

What we have been running over the last couple of weeks has consistently gone well, with pretty much all of them being placed.  However, it was very nice to see Majestic Moll getting her head well and truly in front again at Worcester (15 Aug).  She won very well by ten lengths, and as ever with her, jumping beautifully.  She is a smashing mare and although not big will definitely go chasing at some point as jumping really is her forte.

Prior to Moll winning, Lady Markby had just been beaten in a photo finish at Market Rasen (5 Aug).  It was an extraordinary race where half way through you wouldn’t have been surprised to have read the following day that her form figure was a ‘P’, rather than a ‘2’.  They had quickened from such a long way out that she got tapped for toe and was left a little disappointed, but once they started to come back to her she made ground hand over fist galloping on so strongly, with the line coming just a stride to soon.   She ran her little heart out, and in the intense heat over heated at the end of the race.  The vets on duty could not have been more helpful or professional and she was back on her feet in no time, and for the next twenty minutes stood in front of a big fan which sprayed a light mist over her – she looked like a super model with the breeze blowing her mane, and was so content in that position I think she would have been happy to have spent the evening at the racecourse! Lady Markby seems to have shown no ill effects and is now back cantering happily at home, however as she is not dependant on quick ground, I will probably give her an easy time before we go for her next target.  She, like Majestic Moll, is the most super jumper and will also head over a fence – two very nice mares to be going to war with.

Talking of mares, Talent To Amuse made her return to the track last night at Chepstow (16 Aug), with a super run on the flat, being beaten 4 ½ lengths into fourth after just getting a little bit tired in the last furlong.  She had been off the track for the best part of a year having fractured a bone at the back of her knee, and getting her back was fantastic and to see her run so well and be sound in the morning was even better.  My thoughts are she will probably now go back over hurdles, but I could not be happier with her.

There’s still not a huge amount of racing at the moment, but bit by bit it will start to get going and we are really looking forward to the season ahead. There are some extremely nice youngsters, as well as exciting handicappers and novice chasers to boot – so it’s full steam ahead!