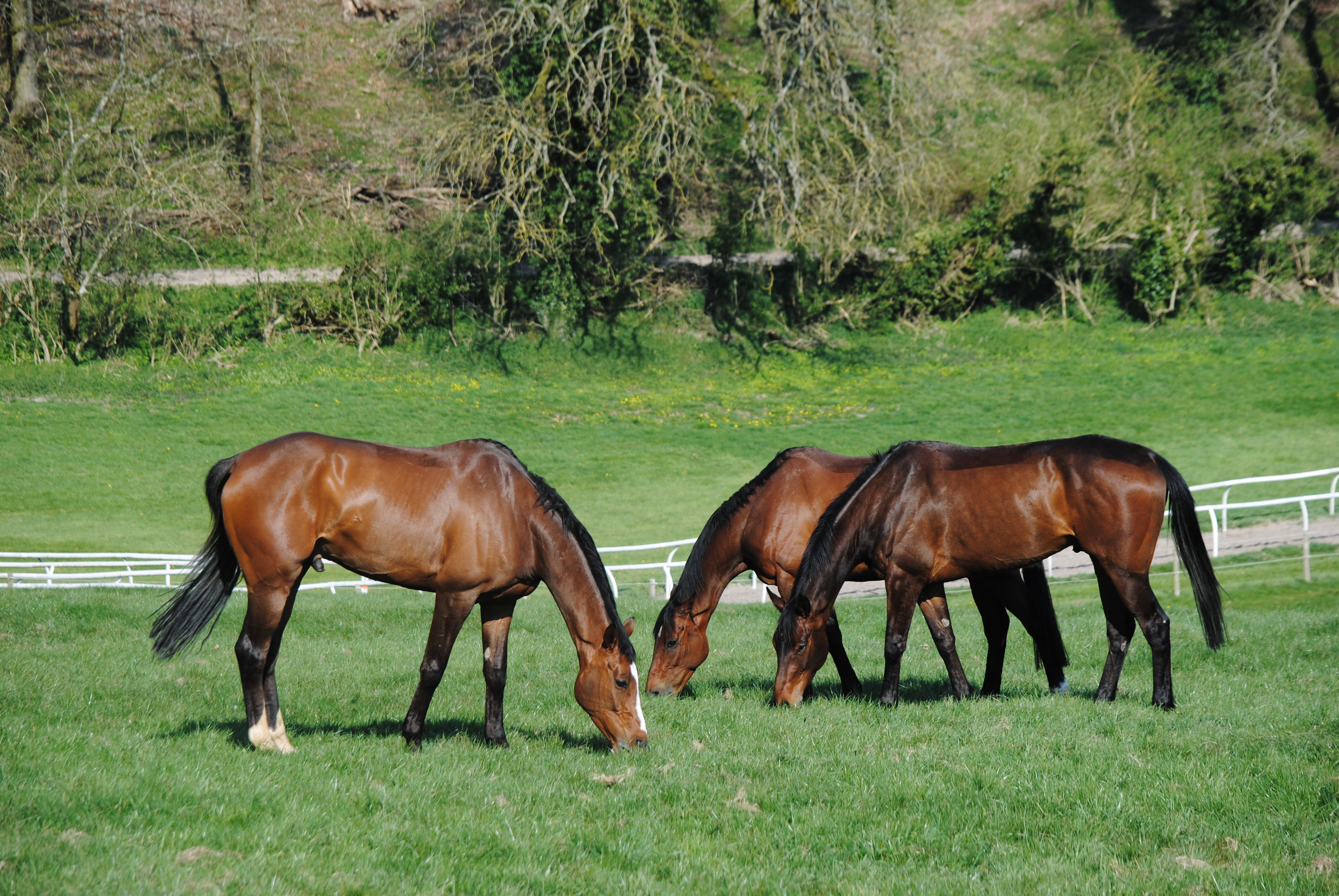 There are so many occasions when I think how nice it would be to be a racehorse and looking at them all out in the field at the moment in the glorious weather, with their full bellies, lying flat out without a care in the world, now is definitely one of those times.  Social distancing is absolutely not a concept that they understand, be it from each other or me, when I’m attempting to give them a scoop of nuts in the evening and as I watch them lolloping round the field there is definitely more than one session of exercise per day going on around here!  What this dreadful virus has made me appreciate even more is just how lucky we are.  We still have structure in our lives and people, partly because of necessity to look after the horses and partly because this is our time of year for cleaning and repairs.  We live in the most beautiful surroundings where we have always taken walking and exercise for granted and where the air is always fresh and the wildlife always interesting.  There is never a time when something doesn’t need doing so boredom is never an option and when frustrations are rising I have always found that the horses are exceptional listeners – they never answer back, agree with everything I say and when they start yawning I find it much easier not to take offence!  They have and always will be so much more than just the enablers for us to run a business and that has never been truer than now.

It is usually at this time of year that we reflect on how the previous jumps season has been and on the horses that we are most looking forward to for the coming winter, so although the season was understandably cut short there is still plenty to look back on and, I believe, much to be excited about in the future.  The highlight of last year was without doubt the Ladbrokes winter festival at Newbury where Paisley Park winning the feature hurdle and De Rasher Counter winning the Ladbroke trophy made for a weekend of celebrations surpassing all others – it is what dreams are made of and when our team presented Barry and I with a signed picture of the horses in Ladbrokes winning rugs surrounded by all those that helped it happen, entitled ‘If Carlsburg did racing…’ it bought home just how much these big days mean to everyone.  Hang In There winning a grade 2 novice at Cheltenham and Paisley winning again on trials day gave us another four graded wins this season which continues to show that the quality of horses in the yard keep rising.  Highly Prized, The Sweeney, Misty Bloom, Belle Empress and Manofthemountain all made significant contributions to the prize money haul and gave us some very special days out but perhaps the most special was Fortunate George winning at Warwick.  It was our conditional, Henry Platt’s first winner and it had certainly been a long time between drinks for George and his owners (metaphorically speaking anyway!), considering he was coming in to the winners enclosure victorious, I had never seen so many people crying – that’s what racing does.

Newbury blessed us with our best days racing last season but it was also the place of our worst.  Fontsanta had been nurtured by Barry and given all the time he needed to mature by his owner Tim Syder and we really felt that we had a star in the making.  Watching him soar over his fences out in front he looked at last like the finished article – he was just too brave at the third last and paid the ultimate price – a great loss for us all.

Youth is the future and we certainly look to have a very talented bunch.  Red Rookie, unbeaten in two bumpers, was extremely impressive and has the size and scope to be anything – he is quite a handful in the mornings so certainly not one I’d be putting my name down to ride but as long as he continues to channel his exuberance in the right direction at the races I think we’ll all forgive him!  Hoi Polloi is another that could be a potential star.  He showed pace to win from an unpromising position in his bumper and has done nothing but improve since his run.  He is doing really well out in the field and if anyone deserves to have a top class horse it’s Nick Mustoe.  Runswick Bay and Sam Barton have also shown themselves to be horses to look forward to from the bumper ranks as well as some exciting novice hurdlers and plenty that have yet to make it the track, the end of the summer seem a long way away!  The support we have had from owners this year has been tremendous and is very much appreciated.

What was undoubtedly very disappointing was Paisley Park and Cheltenham.  Everything had gone so well in the lead up to the Paddy Power Stayers hurdle and we were all so excited but horses and racing are great levellers and it just wasn’t to be.  He seemed a little quiet even in the preliminaries which was unlike him, usually he jig jogs continually and Laura can only just keep a lid on him, but he looked magnificent and we just felt that maybe at last he was starting to grow up a bit.  Hindsight is a wonderful thing and had we known then what we learnt after we would have known that something was probably feeling a bit odd to him even then.  Post race, back in the stables, he was showing an irregular heartbeat which more than explained his lacklustre performance.  Fortunately, although it remained out of rhythm until late on Thursday evening, it rectified itself without any external help by Friday morning which was a very positive outcome under the circumstances.  He went to Newmarket for tests and apart from finding that he has an exceptionally large heart (no surprises there) they were very happy with him and he came back with a heart monitor where the vets in Newmarket could remotely check on what his heart was doing during exercise.  He got back up to do doing a good piece of fast work with no heart abnormalities showing and a very quick recovery time so at that point he was given a clean bill of health and a field of grass for his holidays (pictured)!  He and his best friend, The Domino Effect, are turned out together and both are expanding rapidly (I know the feeling!).