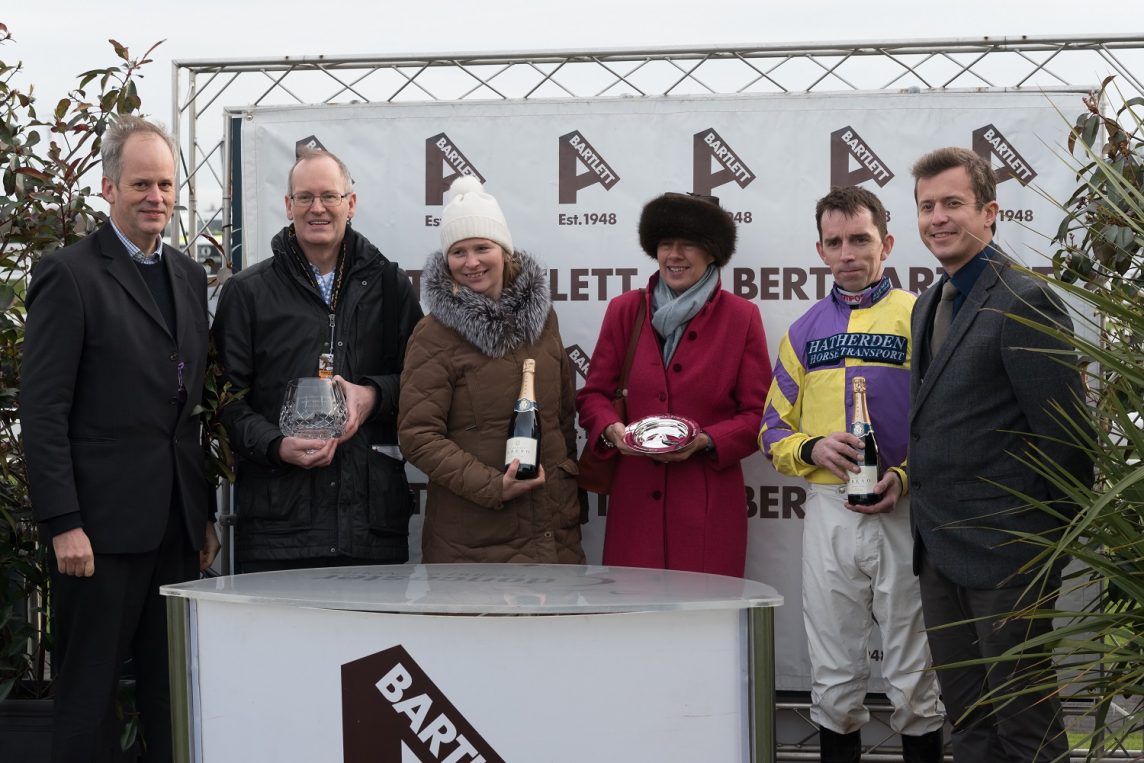 Historically, January hasn’t’ been the best month for the yard winners wise, but we have turned that trend on its head this year – it has been fantastic! Perhaps less so for a couple of our owners, who thought dry January was a good idea until they had some winners.  One, I know, has stayed on the wagon and one fell spectacularly off it!

The girls have been keeping their end up, with Dissavril being unbelievably impressive winning the mares listed bumper on her debut for us at Market Rasen (17 Jan).  She travelled like a dream and quickened away to win without coming off the bridle.  She does look a very decent mare in the making and appeared to be very straight forward through her race. She is certainly one to get excited about with her next target being the graded mares’ bumper at Sandown in March.

Whilst I had travelled to Market Rasen, Barry went down the road to Newbury to watch Belle Empress also make her debut for us, 990 days since her initial point-to-point win.  Having missed two seasons owing to injury, she had four visits to Mastercraftsman (much to her delight but without any product for her enjoyment!) so she then reverted back to training.  She made it all the way to Plumpton on Monday, before it was abandoned due to waterlogging, and so then went to Newbury instead.  It was a very hot race but she ran well to finish fifth and thankfully has come out it fit and healthy so she will now have to do it all again soon! Private Malone also went to Newbury and finished fourth in the handicap chase – he just keeps coming up against some extremely stiff opposition but his turn for winning will come as he is running consistently well.

Fortunate George went back to the scene of his greatest victory, with a run in the valuable handicap chase at Ascot (20 Jan).  He travelled and jumped well early on but just struggled with the downhill fences, and then when colliding with a fallen jockey, it well and truly put him on the back foot (and wasn’t that comfortable for the jockey either!). He stayed on hand over fist in the home straight to finish third but I think we will try and find a slightly easier option next time just to get his head in front as he has been a little star this season!

In the category of stars, or stars in the making, I was thrilled to bits with Fontsanta’s performance at Fontwell on the Sunday (21 Jan).  It was the wettest I have ever seen the course, and by the end of the day it was difficult to tell if we were running on grass or plough. Nevertheless, Fontsanta, who was making his debut, won the bumper beautifully.  He behaved impeccably, bar being somewhat surprised seeing his jockey coming towards him in rather brighter colours than he is used to at home!  Once he got over that excitement, he was brilliant. He is still green and raw, but I have no doubt he will make up into an extremely nice national hunt horse.

With so much rain falling across the country there were plenty of fixtures lost due to waterlogging so at the start of last week we didn’t have very many runners.  On Thursday we went to Warwick (25 Jan) with Not Normal.  He is a horse with a massive engine but is sometimes a little wayward at home so I was thrilled with his run where he finished second, only beaten a length, with the front two pulling well clear.  Barry rides him every day at home and he is a handful, but you are prepared to put up with all of that, when they perform so well on the track.  I think he will continue to improve and his next target will be the sales bumper at Newbury in March.

My car now doesn’t need me to drive it to Doncaster, it just knows! Having been up there on Tuesday, where I was delighted to purchase Reelingintheyears for Clive Colquhoun as a replacement for the retired Caulfields Venture, it was back up to Doncaster again on Friday (26 Jan). Allez Jacques failed to jump with his usual alacrity and came home with some cuts and bruises, but will be fine with a little time.

On Saturday I went back up to Doncaster again for what was always going to be a big day for the yard.  Eniscoffey Oscar (his owners pictured) is not overly big but has the heart of a lion and he ran an absolute stormer to win the Grade 2 River Don novices hurdle.  The ground was much softer than ideal for him but nonetheless his desire to win and natural ability enabled him to get his head in front.  We have now entered him into the Albert Bartlett Novices Hurdle at the Cheltenham Festival, where under normal circumstances he should get his preferred better ground, and I would like to think with his sheer toughness that he should be competitive.

Vibrato Valtat couldn’t handle the soft ground over three miles in the Sky Bet Chase.  Having made some jumping errors, it just stretched his stamina.  I have no doubt that three miles is the right distance, but he does need nice ground to truly stay the trip.  We also debuted a beautifully bred filly in Truly Amazing. She ran a lovely race finishing sixth, in what I imagine will finish-up being an extremely hot mares bumper. She travelled brilliantly but having never been off the bridle at home, was caught for experience when they quickened and then stayed on with purpose at the end.  She is mare that I think will have no difficulty in winning her races.

Barry went to Cheltenham on Saturday, where Full Irish continued to be a bit of an enigma.  He just spent to much time in the air over his fences, and so didn’t travel as well as he can do and finished fifth, well beaten in what was a very competitive handicap. When we get everything right with this horse I know there is a big day in him, it’s just a case of trying to get all the stars to align on the same day.

De Rasher Counter ran an absolute stormer and was staying on very well in third, when clipping the top of the last hurdle and slithering on landing. It’s such a shame as he didn’t deserve it and was back on his feet in a second but having so run so well it seemed very unfair that he didn’t get the reward he deserved. It seemed even more unfair on Tuesday morning when the handicapper raised him seven pounds to a mark of 140! But, what it does confirm is that he is a horse capable of running in top level races, which makes him extremely exciting going forward.

There were plenty of sore heads at Bonita Racing Stables on Monday morning, as a win in a Grade 2 race needs celebrating – they don’t come along that often – although, judging how the team were on Monday morning perhaps that’s not a bad thing!

We have plenty of youngsters that are just about ready to make their debuts in bumpers. We ran a nice horse at Hereford on Monday (29 Jan), Pemberley, who was a little green but ran a very promising race to finish fifth and Misty Bloom, who was beaten ¾ of a length to finish second at Lingfield on Tuesday (30 Jan).  We look to have a strong team of novices, which is very exciting, and long may it continue!