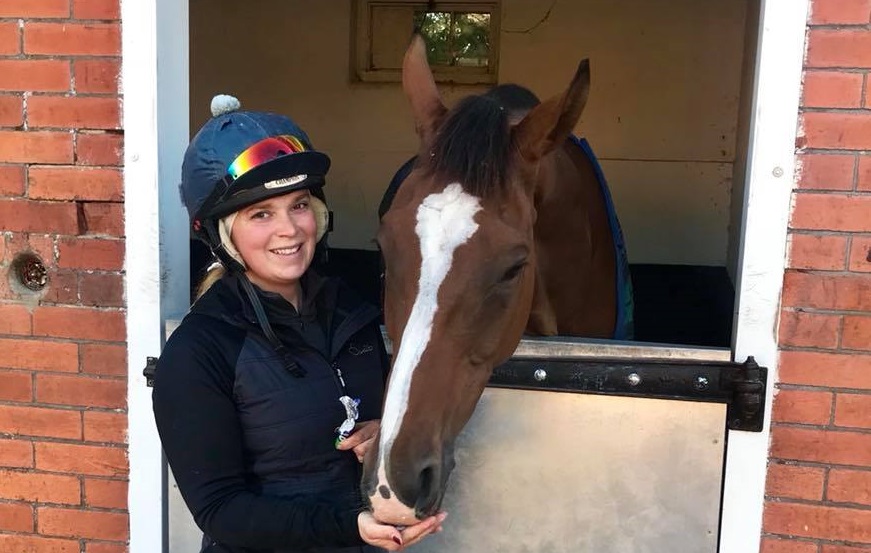 Javert’s winning return after 800 days off the track!

Time is rolling on, and it is not long before the core jumps season gets started. We have enjoyed a successful summer with the horses that we have run – and what a summer it has been…. glorious weather and temperatures with no rain in sight, bar our Owners day on August Bank Holiday weekend! With the team having made the yard spotless and the horses immaculate, the heavens opened at 9am and did not stop until late on Sunday night – absolutely typical! Not to be deterred we had a super day with delicious food and plenty to drink, and although it was a shame we couldn’t parade the horses, it was great to see so many people braving the elements and enjoying the day anyway.  What was also good is that it gave everyone time to have a proper chat with each other as well as all the staff, who were for a change, not rushing around leading out the horses.  So, although I would not wish for it to happen in the same manner next year it was an extremely enjoyable day.

The Owner’s day followed on the back of Pawn Star’s victory at Stratford (23 Aug), who had been off the track for over a year with a leg injury. He jumped superbly, travelled beautifully and won with plenty in hand and it was a very exciting return.  In the initial days after his race Pawn Star seemed fine and was back in work, however very sadly a slight niggle has re-appeared putting pay to the rest of this season, but it will hopefully allow him to come back and make another successful foray to the track next year. Chelsea Flyer made his eagerly awaited debut over fences on the same day, and in the main he jumped very well, but when challenging for second, he slipped and lost his footing at the last and fell. In doing so he chipped a bone in his hock, so he too will be on the easy list for some time to come – The life of a trainer is an emotional roller coaster!

It has been a somewhat barren spell for The Bonita Racing Club, but I was absolutely delighted with Freedom Run earlier this month at Worcester (2 Sept) running a cracker to finish second in her bumper not beaten far, and in turn finishing eighteen lengths clear of the third.  I think she is a really nice mare and should give everyone plenty of fun.  We are introducing a new filly to the club in the shape of What A Hoot, who is from the family of Best Mate and by Presenting, and from what she has shown us at home I think could also provide a huge amount of fun.  There are some shares still available – so please do get in touch if you would like more information or visit the club’s web page here.

Talking of fillies, I was also delighted with Fortia who was just beaten in her mares’ maiden hurdle also at Worcester (11 Sept).   She improved dramatically from her first run and was given a smashing ride by Adam Wedge, she is a filly with plenty of ability and should hopefully lose her maiden tag next time.

The term ‘horses for courses’ is never more-true than it is with Majestic Moll, who has been the absolute model of consistency at every racecourse bar Uttoxeter, where she has raced twice, and on both occasions has run very disappointingly.  Therefore, I am not going to go with third time lucky – I am listening to you Moll and I won’t put you through it again! She will now go novice chasing and there is a race for her in early October at Worcester, which I think will be ideal as there is nothing she likes more than jumping.

I was absolutely delighted with Shiroccan Roll on his winning debut over hurdles at Newton Abbot (21 Sept).  He is a homebred of my brother – Jonathon and one of his oldest friends Mark Scott and has always been a gorgeous horse and an absolute bundle of energy. He knuckled down to the task and although showed some greenness he could not have travelled any better through the race and look more impressive.  There is some room for improvement in the jumping department, but he is one of those horses who thinks he knows it all and doesn’t always want to be told, but I imagine after this run he may have a little more respect for what we are putting in front of him.  He has come out of his race extremely well and I would imagine it won’t be too long before he is out again, and I think he could be smart going forward.

There is no doubt that all the horses are coming to hand as we would want them for the time of year and it has been good to get some winners on the board through the summer but perhaps the biggest achievement for the whole team here was the victory of Javert who had been off the track for two and a half years before winning a valuable handicap at Uttoxeter on Sunday.  I am extremely grateful to Axom and his team of owners who still believed in him even though he had been off the track for so long and to Laura Scrivener (pictured) and PC O’Neil who have been his regular work riders and the rest of the team here who have all in one way or another been involved in the preparation – it just goes to show that in racing persistence is a necessity and patience really is a virtue worth having!  Touch wood he has come out of the race well and my thoughts are at this stage that he will head to the BetVictor Gold Cup at Cheltenham’s November meeting.

Having been with us for over a year I am very sad to report that one of our team members Molly King is leaving us at the weekend to head ‘Down Under’ and experience the world of Australian racing.  She will be very much missed by us all here as not only is she a very good rider and a lovely person, her cake and biscuit making had become legendary and I am not sure who is going to take over her mantle!  We all wish her the best of luck and hope that she enjoys it but not too much that she doesn’t want to come back!

I hope it will not be long before the weather changes and we get some consistent rain as I can’t wait to get going properly – there seems much to look forward to.