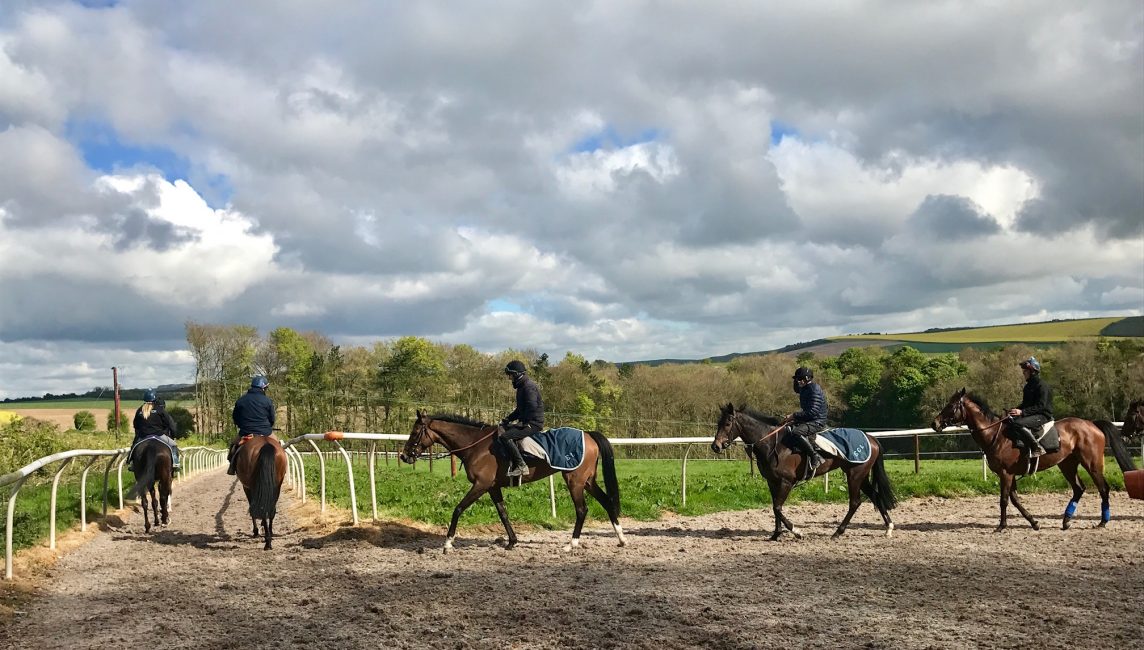 I remain so proud of everybody here, both human and equine, to have kept the show going during the horrible weather conditions we’ve been having. One minute its snow, the next torrential rain, with some beautiful clear sunny days in between, but it hasn’t been particularly warm!

Thankfully the horses have remained in tremendous form and, although over the last ten days or so we have not had hundreds of runners, what has run has been brilliant.

In these kind of conditions, with temperatures rising in the day and falling sharply at night and some horses being more naturally warm than others, trying to get the right number of rugs on the right horses has been a challenge. It’s a credit to the team that they seem to continually get it right, and I think it’s these details that allow the horses to continue to perform at the top level.

Having won three on the bounce, Flemcara went to Sandown (Sat 3 Feb) for the £100K Betfred Heroes Handicap Hurdle. The rain poured down all morning, which conditions wise was perfect for him. However, with a full field and not much pace it was a very messy race and Flemcara seemed to get the worst of the argument and found himself shuffled to last turning for home. He stayed on to only be beaten twelve lengths, and as ever was an absolute toughie.  He has come out of the race very well and there is a chance he could go to Haydock this weekend.

On Sunday (4 Feb) Private Malone went to Taunton and ran a beautiful race to finish second galloping all the way to the line. Richard Johnson was due to ride him, but he had taken a nasty kick to his knee when unseating in the race before, so Gavin Sheehan stepped in for the ride and very nearly managed to get him to win. His turn should come shortly as he is managing to run consistently well and keep his condition, which I couldn’t get him to do last year, so a win must come for him in the very near future.

It was a quiet week runners-wise until Thursday (8 Feb) and as ever a lorry load headed to Doncaster! It’s been a great track for us for many reasons, partly because it’s big and galloping, and partly because it’s one of the only courses where there is a chance of getting reasonably decent ground at this time of year. Bar the odd one that relishes very soft going, I feel the vast majority of horses prefer to have a sound surface of sorts and that’s something Doncaster usually has.

Buster Thomas, running for the first time in a tongue tie, and on ground that was considerably better than he has run on all season, was very unlucky at the first, when a fallen horse stood up and brought him to an absolute stand still, and his chance of winning was basically over from that point. He jumped superbly and travelled beautifully into the race and although he only finished fifth, it was a much better run and perhaps demonstrated that the going is more important to him that I had given him credit for. I think we will see an improved horse going forward.

Our next runner was Paisley Park who I had wanted to give one more run to for experience before thinking of the Cheltenham Festival. He is learning run by run and in the main was slicker again with his jumping until the last when he probably just had too much light and stuttered into it – this combined with giving the winner seven pounds definitely made the difference between winning and losing. It was still a very good run and we will keep The Festival on the agenda and see how we go between now and then.

Gunfleet then tackled three miles for the first time in the handicap hurdle. He is a horse with a huge amount of potential as he is far from the finished article, and he jumped, travelled and galloped all the way to the line to win by a cosy half length. It was only his fifth ever run of which he has won three of them, and he is a horse that I can’t wait to see jumping a fence in time. He is certainly one to remain excited about.

Freedom Run made her racing debut at Huntingdon (8 Feb) for our Bonita Racing Club in the mare’s bumper. She was so green to start with, that there was a concern at one point that she might just drop off the television! Thankfully, that did not happen, as after being reminded by Brian Hughes why she was there, she took off and passed six in-front of her up the home straight and finished out the race very well. She seems to have enjoyed the experience and I expect she will leave that run well behind her.

Our only runner over the weekend was Woolstone One at Warwick (10 Feb) and what a runner she was! She was an absolute star, winning the mares listed race and has just got better and better. She travelled almost too well, making the odd mistake, however, when push came to shove she put her head down and galloped to the line winning comfortably. She is a mare on the up, a pleasure to have around and a great addition to the team this season.

The weather continues to play havoc trying to get runners out, but I am hoping we can have a busy end to the week, so fingers crossed the horses remain in this rich form!