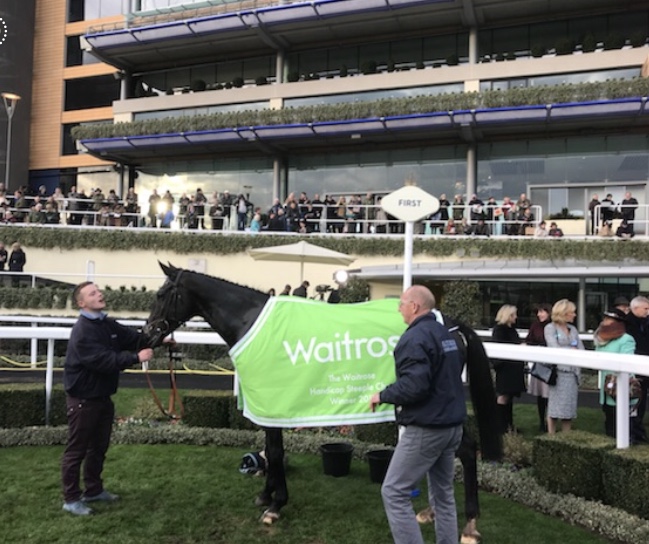 What an amazing day last Friday at Ascot (24 November) was for Fortunate George, the team here and all of George’s owners.

George was the most brilliant jumper of a hurdle and at the start of this year we were so excited about him going over fences, however, it has taken a bit of time to get his confidence over the big ones. You could see him gaining in confidence during his run at Newbury, but when you look at the lengths he gave away in front of the fences versus the distance he was beaten, he really should have almost won that day.

He really pulled it all together at Ascot on Friday and I must say that Johnny Burke gave him a super ride. At no point did he let him think anything but forward, and in doing so his jumping improved ten-fold. As I said to Johnny, I thought he may have lost his wing mirrors at the finish, as he won the race by sixteen lengths!

It was obviously great winning such a valuable race at Ascot, but the icing on the cake was the presentation, which was made by Prince Charles and the Duchess of Cornwall. George is owned by a great group of people, who absolutely adore him, and I love the fact that each member of the syndicate got to have a conversation with the Prince and Duchess about their precious boy. George, and I’d expect most syndicate owned horses provide such a positive impact to the people who are involved with them and their own life challenges.

He went up 10lbs which is probably fair and I hope George has many more wins to come over fences. He has since had a constant stream of visitors plying him with polos and carrots, so if there were ever an incentive for victory, I think he has that!

Earlier in the week at Fontwell (19 November), I was delighted with Private Malone, who looks like he is getting back to his best. We really struggled to keep condition on him last year and hence I never really felt I had him right. This term he has been so much better and easier to train, and I hope he’ll now go from strength to strength. He certainly has the ability if he can get it all together.

Both Water Wagtail and Balibour ran well at Wincaton (23 November). Wagtail probably found the ground just a bit to testing and having put himself in with a shout at the third last, he made a slight error and that was him cooked, but he still finished an honourable third. Balibour has done nothing but improve this term and also finished third in his race at staggering odds of 80/1!

Racing is nothing if not a leveller. Having had a very good week, Woolstone One headed off to Uttoxeter (26 November) on Sunday. And at odds at 3/1 on, there was no doubt that we anticipated she would continue her winning ways. However, in a three-horse race it can always finish-up being tactical and she just got run out of it to finish second. There will be other days.

We have a busy week ahead of us, with plenty of runners especially up at Doncaster, where the plan is for Irish Prophecy to head north for the two-mile novice hurdle up there. Fingers crossed things will go to plan!