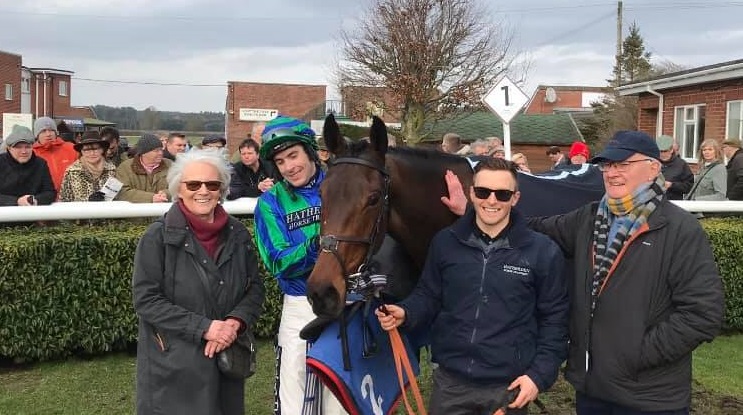 There is no doubt that in all my training career we have never had such media attention, thanks to Paisley Park and his lovely owner Andrew Gemmell.  They have been the most fantastic way to showcase the yard and I am very sorry to any of you who are now bored of looking at our faces both in publications and on the television – it will all be over soon! It is of course very exciting, and Barry and I remind each other, as much as there is pressure, it’s pressure to be enjoyed, however both of us are now willing Thursday to arrive.

February has been an interesting month, starting with the snow, which put pay to a lot of racing and that was closely followed by ‘flu-gate’.   Throughout my time training, I had always given the horses their annual boost as and when they needed vaccinating, be that in August, November, January or whatever the date was and worked around it. This year I thought I would be really organised and get all the horses flu vaccinations done in the summer, so that there would be no interference in training during the season.  How typical that this was the year that flu was on the horizon and the new ruling was that we needed to get them vaccinated in a six month period and therefore not one of our horses was eligible to run! In fairness it certainly doesn’t seem to have done the horses any harm to have their vaccines and along with some great advice from our vets Simon Knapp and Clive Hamblin, not one of them seemed to show a reaction to it – anything that didn’t win I can’t blame that anyway!

When racing did resume one of our first runners was Viva Vittoria at Market Rasen (17 Feb, pictured) and what a great run it was.  Although she still has plenty to learn in the jumping department it was so lovely to see her finish with her head in front.  There should be lots more to come from her.  Junction Fourteen, who headed to Doncaster (20 Feb) to run in his first veteran’s chase also ran a stormer, he jumped superbly and was only collared on the run in, finishing an honourable second – it was a great run back for him.  It gave all of us confidence and it may well be that the National fences in the Topham Chase at Aintree beckons for his next outing.

Flemcara having run a super race to finish third in the £100,000 race at Sandown earlier in the month, then went to Exeter (22 Feb) in a Pertemps qualifier. He needed to run very well in this to gain a place in the final at The Cheltenham Festival, as off his then mark he wouldn’t have got in.   He could not have run better, winning with any amount in hand and still only going up four pounds.  I think he has a very good each-way chance tomorrow in the final.

Thunderstruck also ran a great race at Fontwell (24 Feb) finishing second again in his bumper.   He travelled so well, and just got nailed on the line – beaten a head.  He is a horse with any amount of ability and so deserves to win, but a summer out at grass will also benefit him and his best will not be seen until he jumps a hurdle.

Boreham Bill was another to head out, this time to Uttoxeter (25 Feb), he again did everything right with Paddy Cowley riding him for the first time.  He jumped beautifully until the last when he rose in front but came back down on top of the hurdle and taking it with him.   He kept galloping but it cost him the race and finished third. I have not doubt there are races to be won with him and it was a very good ride from Paddy, so hopefully it won’t be long before he also gets his head in front.

Talking of getting heads in front Old Rascals certainly did that in no uncertain terms at Wincanton (27 Feb).   He cantered through the race jumping spectacularly before sweeping past to win by an easy fourteen lengths.  He is such an honest horse and has a great way of going and really could be anything.  His team of enthusiastic owners have not had a huge amount to cheer about since the days of Andy Kelly, so it was a great result for them, and I hope the start of many more.

The first weekend in March was a big Saturday for us at Newbury (2 Mar) with both Fortunate George and Private Malone needing to un-blot their copy books.  Private Malone looked to be the one taking control turning for home, but he then weakened quickly, and I think there may be an issue with his wind.   Fortunate George on the other hand having travelled some what on and off the bridle finished off the race strongly coming in a good third and I have no doubt will build on that.  He is a horse with huge amounts of talent but is not always keen to share it – I think in human terms he would be a comedian!

Javert also ran in the Greatwood Gold Cup at Newbury and probably found the ground just slower than ideal, but again he ran a great race to finish fourth beaten only six lengths. He has improved for that run and his next start is most likely to be at Ayr or Aintree.

With the ground riding on the quick-side, I pulled Gunfleet out at Doncaster (2 Mar) and he will have plenty of options going forward.  Boomarang went there and started off favourite and travelled and jumped as a favourite should, however coming up the home straight, for whatever reason, he completely forgot himself and started jumping violently to the left and accordingly was unable to sustain his challenge.  Considering what he did he was only beaten seven lengths, and this is a horse to take note of once we iron out these little issues – he is booked for an intensive course of schooling!

We have been lucky enough to run some extremely nice bumper horses of late, with Namib Dancer stepping up markedly on his first run, at Huntingdon (3 Mar) for a fast finishing third place.  The Domino Effect ran a beautiful race at Southwell (4 Mar) on his first attempt finishing fourth and Hawk’s Well was not quite strong enough yet to handle to soft ground at Wincanton (7 Mar), but nonetheless stayed on stoutly for third.  They are all horses to very much look forward to.  Pemberley just got beaten a neck into second, also at Wincanton and should be winning races in the future.

It would be too easy to think that all of them have put their best feet forward and Full Irish is definitely a head-scratcher.  He works so well at home and jumps beautifully, but he just doesn’t seem to want to put it in at the racecourse. At Sandown (8 Mar) he galloped around happily and finished with his ears pricked, the problem being plenty of others finished in front of him. A stern word will be needed with him!

It was also a very sad day at Hereford (9 Mar) where The Bunnyman struck through his tendon and had to be put to sleep.  He was a horse with huge potential and never got the chance to really show it.  It’s a loss that has hit us hard and I know it’s also hit his owners hard and is something that is always difficult to come to terms with.  Racing really is an emotional roller-coaster as having gone through that, Fonsanta ran in the last on the same day and never came off the bridle to win by eleven lengths, looking hugely impressive in the process.   It was a positive note to finish the week on and to give us confidence ahead of this Thursday at the Cheltenham Festival.

Touch-wood Paisley and Flemcara have had perfect preparations now all we need is some luck!