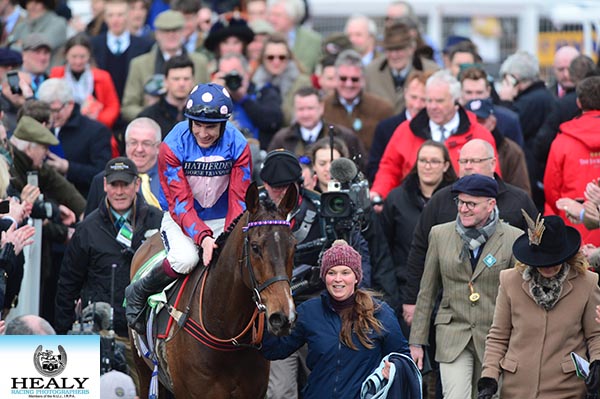 What a day last Thursday was at Cheltenham.  The build up to Paisley Park running in the Sun Racing Stayers Hurdle had been massive, and the expectation could not have been higher, but as we all know Cheltenham is Cheltenham and it is never easy. We were lucky in that Paisley had the most brilliant preparation, but with eighteen runners going forward at no point could anything be taken for granted, and as ever with Paisley he likes to give you at least one heart stopping moment in his races!

I am not a particularly superstitious person but having watched Paisley run in the Cleeve hurdle back in January from the Owners and Trainers stand, I decided it would be the right place to watch him run again.  Barry would be the same as me in the superstitious department and having watched our previous Cheltenham winners from the owners and trainers marquee, he decided that would be his spot this year as well.  I imagine from now on all races at Cheltenham will be viewed separately and from those same areas!

The sheer relief, elation and pure joy of that moment when Paisley and Aidan crossed the line in front, is very hard to explain – but it was without doubt a moment we will never forget.  Paisley lapped up all the praise and walked ears pricked down the walk way receiving all the adulation with Aidan – what a great, great day.

My brother had flown all the way from Australia to be part of the action and as it was a chance meeting with him that had sent Andrew in our direction in the first place, it was extra special that he was there.  The support from both family and friends was unbelievable and so lovely that the day could be shared with so many – it was a day that racing should be proud of and one that we were so proud to be part of.  All Andrew could say to me was it was the best day of his life, and to be honest I think it was for us all.

Paisley has been an extraordinary horse, taking us on an emotional roller coaster and he’s run his little heart out for us all season – we are very honoured to have him.  He won’t run again this season, as at only seven, I hope he has plenty of time ahead of him and it would be magical to have him back to defend his crown next year and take the traditional stayer’s route to get to that point.  I expect he will be parading at various racecourses before the end of the season, together with those big ears pricked and our heads held high – what a horse.