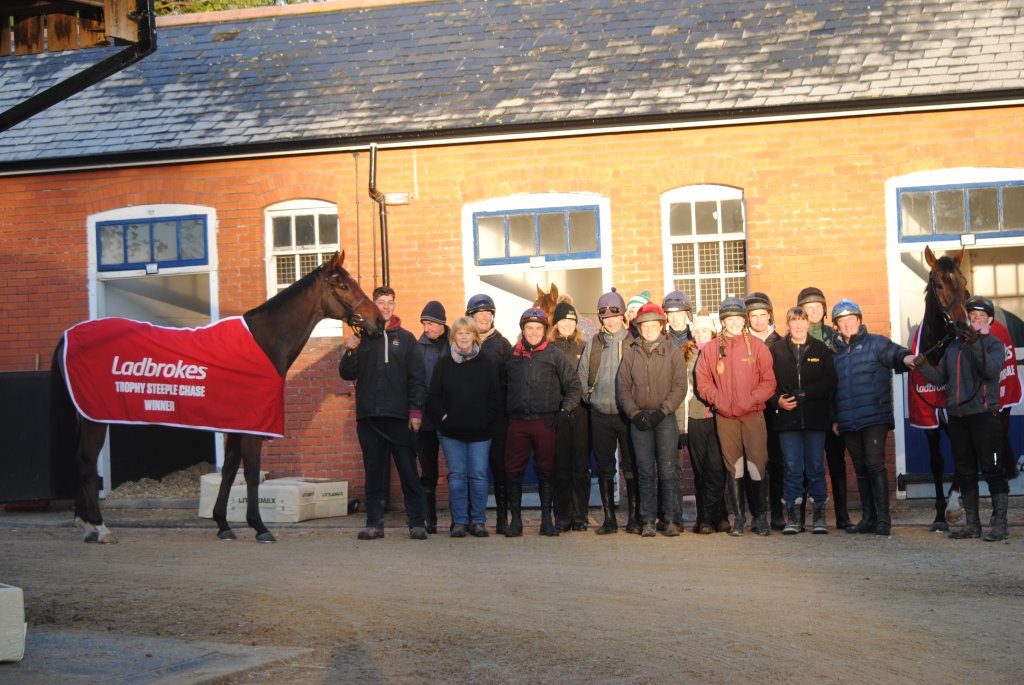 A weekend to remember!

It always makes it easier going into a big Festival, (which is what the Ladbrokes Winter Carnival at Newbury is fast becoming) when the horses are in great form, and they had certainly been that throughout November.

To have a horse like Paisley Park in the yard is both a privilege and an added a pressure but is one that we are more than happy to embrace on every level.  Newbury on the Friday was possibly the most pressure I had every felt going to the races.  Paisley had achieved so much last season and caught the public’s imagination in a way that we have never experienced before, and, although we knew there would be improvement to come, we still didn’t want to let anyone down by producing him in a way that didn’t allow him to do himself justice.  He had eaten a lot of ‘pies’ across the summer (!) and it took a fair amount of slow fitness work to get him to change shape in any way at all.  Then once he started to come into himself and remembered he is a finely tuned athlete it was then a case of getting him on a lorry and away for a racecourse gallop.   Newbury were very kind to allow us to give him a gallop before their fixture on 7 November, but the way he behaved in the paddock making divots on their beautiful grass they may have regretted it!  He just needed to go and chill out again after having had the experience of the Cheltenham Festival and I think his trips to Newbury made a big difference in getting his head right for the start of this season.

We were so proud of how he ran, and under Aidan he travelled as well as he ever had, jumped beautifully and galloped all the way to the line, and in classic Paisley fashion as soon as he got to the front pricked his ears to suggest he was extremely happy with where he was.  There is no doubt he had a good blow afterwards and will improve for it, but it was a great race and lovely to see a horse as tough and genuine as Thistlecrack chasing him home.   Barry has been instrumental in the preparation of Paisley and he was every bit as nervous as I was, but every bit as proud.  Paisley has come out of the race unbelievably well and extremely fresh so the Long Walk Hurdle at Ascot before Christmas is firmly on his radar and hopefully his season will continue how it has started.

The relief of Paisley’s victory led to a few impromptu drinks at our local Silks on the Downs, so there were definitely a few sore heads the next day in the yard, and rightly so.  However, we kicked on and got through the morning and headed back to Newbury for De Rasher Counter in the Ladbrokes Trophy.   As I said before it is so great going to the races when you know your horse couldn’t be in better form, what we didn’t know was whether he was good enough to win a race like the Ladbrokes Trophy – and he answered that question in no uncertain terms!  He was given a lovely ride by Ben Jones and travelled and jumped beautifully and ran all the way to the line and was a huge result for the yard and a day never to be forgotten.  Rasher’s owners were all able to make it and the scenes of pure joy that followed are what racing is all about.

We are extremely lucky to be training from a yard with such a rich history as this one, and it made us very proud to have kept up tradition by producing a third winner from here of the Ladbrokes Trophy (formerly the Hennessy Gold Cup).   Rasher has also come out his race very well and having been raised to a mark of 160, our first choice will be to have a look at the Cotswold Chase at Cheltenham in January and decide from there whether he is likely to be a top class handicapper or potential Gold Cup horse – how exciting!

What has been so rewarding is that the back-up team to Paisley and Rasher are every bit as strong. Hang in There was hugely impressive winning the Grade 2 SkyBet Sharp Novices Hurdle at Cheltenham (17 November) which was also a fantastic day.  He is not especially big but is as tough as they come and all he wants to do is please.  He jumped and travelled with enthusiasm and galloped all the way up the hill in rather unpleasant weather, but in no way did it stop him.  I think he is probably a horse that is better on better ground, but the fact he seems to handle pretty much any conditions means his versatility should stand him in very good stead.   Our plan is to head to Sandown in the New Year in the Tolworth Hurdle and see how far he can go in the two-mile novice hurdle division.  He has already shown in Ireland that he stays further, and he is a horse to be very excited about.

Another exciting novice is Éclair Surf who ran at Exeter (13 November) and is the complete opposite to Hang In There in that he is extremely tall and leggy and still very much a frame, but what he does share is an ability to travel and jump, but over some-what further.  He loved the soft ground and never really came off he bridle to win under Adam Wedge.  His future will lie over fences, but he is a horse we think very highly of so we will head for the Challow Hurdle at Newbury on the 28th December and see how far he can go.

Another nice novice who hasn’t got his head in front yet is Namib Dancer and who has run two fantastic races to finish second on both occasions.  He looked all over the winner at Wincanton (27 October) going well clear before the last before then making a complete horlicks of it, and then regrouped himself to still finish a clear second.  He then went to Kempton on ground that was a bit too soft for him and ran a great race just beaten by a horse with more experience.  He has plenty speed as well as size and scope and is one to very much look forward to.

Shang Tang is another who ran with huge amounts of credit when second at Chepstow (20 November) finishing like a train.  We wanted to start him off the right way by getting him to settle but when he missed the third last it just meant the winner got away on him, however I do not think he will be long in making amends.

The handicappers have also continued to shine, with the likes of Misty Bloom winning for our Bonita Racing Club at Wincanton (9 November).  She won easily and gave her team of owners a wonderful Saturday out.  Her next start is at Cheltenham this weekend and for a mare that started off on a pretty lowly rating it is so exciting to see how far she has come, and how time makes such a big difference to some of these horses.

Our American import – Highly Prized – who did us all proud across the summer, stepped out on slightly softer ground at Huntingdon (12 November) and took it in his stride by winning a valuable handicap. He has an incredibly high cruising speed and is very nimble from A to B over his hurdles and definitely puts his rivals to the test.  He won again impressively, with Ben Jones in the saddle, and I think is a horse that could take a pretty high order in two-mile handicaps. Even though Huntingdon was softer than he has experienced before I don’t think he is a horse that will want it too soft, and we will look at some of the more valuable spring contests as it would be fantastic to bag one for his enthusiastic owners.  He is a horse that likes to run fresh so we have just kept him ticking over in the hope that these storms will blow over and there might be some better ground at some stage before March!

The other end of the scale was Belle Empress who loves the mud to fly and the further the better, as demonstrated at Exeter (6 December) last week when she came home to win by a neck.   Her owners have not always had the best luck with their horse’s, and I was so pleased for them as well as Belle that she won and picked up a descent prize in the process.  There is no doubt she knew she had been to the races, 3 miles and 6 furlongs on soft ground is a long way to go and I think was more than happy to have an easy couple of days afterwards, but she is back now and we will look for a similar contest early in the New Year.

Pemberley is a horse close to my heart as I ride him regularly.  He is full of personality and although the distance at Hereford (27 November) was ultimately on the short side for him I was thrilled to see him get his head in front and once again we saw Ben Jones to great effect.  He has obviously modelled himself on Paisley based on the fact that as soon as he got to the front he pricked his ears, but he has a long way to go before he can truly claim equal status!

There have been some nice performances that haven’t resulted in victory but will certainly be improved on.  This included Fonsanta who jumped beautifully around Newbury in a novice chase finishing behind Champ and learnt so much and I am very much looking forward to him running next time.  Flemcara was only just ready to run at Sandown (7 December) following recovering from an accident in his field when on his summer holidays. The ground was desperate and it caught him out fitness wise, however Chepstow during the Christmas period is his next target.   Closing Ceremony was another I was delighted with at Newbury, he is a horse that has been difficult to keep sound over the years but his run was full of promise and that should set him up for Haydock on 21st December, which is a track he always saves his best for.

It was also good to see Fortunate George put some effort into his race last Saturday at Sandown.  He had started to resent wearing headgear so leaving it off definitely helped, as did Henry Platt’s 10lb claim.  George finished third in the Pertemps Qualifier and will also head to Ascot in a conditional jockey’s hurdle.  Henry has now had three rides for us finishing second and third twice on Water Wagtail and Private Malone and he is now aiming for the winner’s podium, and hopefully it will not be long in coming!

We cannot thank people enough for their very kind responses to our awesome weekend at Newbury.  We have had some lovely cards, emails and messages, some of which have been very humbling and hopefully the season will continue in the same vein and we can say thank you for many more!