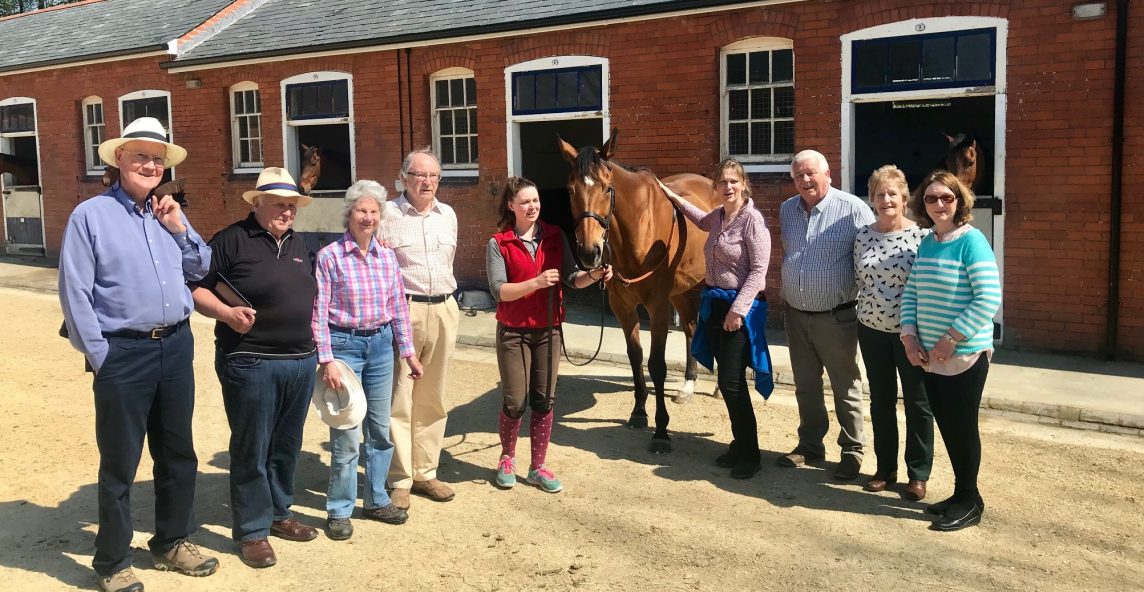 A fond farewell to Shotgun Paddy

With so much racing being abandoned, up until last week, we’ve had very few runners and I am afraid it has been rather too long since our last blog and for that I must apologise! However, in the last week or so things have taken off again, with lots of runners and some nice winners as well.

We had a some-what abortive trip to Fairyhouse (1 April) with Woolstone One early in the month. Having always been a little tricky when she comes into season, we had done lots of tests to make sure that was the last thing she was thinking about, but in the race she never picked the bridle up, finishing sixth in the Grade 1 hurdle, and returning to the racecourse stables in full season – if only they could talk! It was such a shame as she had been in fantastic order and although beating Laurina would have been a long shot, she was more than fancied to finish second to her and that would have been an amazing result. Instead, after a good chat with her owner, Paul Jacobs, she has now gone off to visit Jack Hobbs and having been such a good mare winning three hurdle races, one being a listed, and two bumpers she should have a fantastic career as a brood mare – hopefully she will be in foal with the next champion!

On the same day, Shotgun Paddy ran at Ffos Las in his third national of the season. He ran his little socks off as ever and finished a gallant third. Having competed in all the big staying chases in the last five years, we all felt he was not getting any quicker and that the time had come to retire him. For a horse whose jumping had always been crabbed, it’s extraordinary to think that in his distinguished career he’s never fallen and has also never taken a lame step. He has been an absolute super star for us and will be sorely missed. One of the best things that happened for Shotgun Paddy this season was having a good few days out hunting with Ryan and Meg Bliss and he certainly fell in love with them and I think they fell in love with him, so he has left us and will spend his retirement with them, hunting and generally having a lovely time. Having seen the pictures so far, he has definitely taken to retirement well!

The Grand National Festival as ever was a fantastic spectacle. It really is done superbly with everyone, both equine and human, receiving first class treatment. The ground was obviously a tricky issue for any of ours with it remaining heavy, but as is always the case when the Grand National is completed with all returning home relatively unscathed there is a huge sigh of relief and it was a brilliant race to watch. Us English are going to have to try harder, with the Irish winning it this year, the Scottish last, at this rate I can see it going to Wales next year!

Dissavril was disappointing for us in the mare’s bumper at Aintree (12 April) having been so impressive winning a listed bumper at Market Rasen. I can only put it down to having an off day for her, as she has come out of the race well and our only change was to put a cross noseband on her, which maybe she just didn’t like. Fortunate George (14 April) didn’t stay in the three-mile handicap hurdle on Grand National day, having travelled and jumped extremely well throughout the contest. He is now off to have a very well-deserved holiday and will back to mix if over fences and hurdles next season.

Casino Markets returned to the track at Cheltenham (18 April) having spent his summer in America and he ran much better than his finishing position suggests. He travelled into the race beautifully before making a mistake at the top of the hill and then stayed on again. On how he seems to have come out of that race I think we should have plenty of fun with him over the next few months.

Majestic Moll also had her first start back since a winter break at Cheltenham (19 April). Having been waiting for good ground for a long time, it was perfect for her and she jumped magnificently out front before tiring at the back of the last, she still kept going to not be beaten far. She’s another one I am thoroughly looking forward to having some fun with this summer, and I think she is still ahead of her mark. It was an interesting day for Cheltenham as they had to deal with extreme heat changes and the effect that had on some of the horses running. Personally I think they got the balance right by not running the staying chase and although I totally understand the frustration if you had a runner lined up for the contest and not being able to run, horse welfare is paramount and not just in today’s world.

Poor Junction Fourteen is still shocked that he found himself on the floor at Fontwell last Friday (20 April). He jumped superbly until the second last when he just got in tight and took a horrible fall. Thank goodness he was fine other than taking a bang to his head, and he is back mixing trotting and going out in the field and I would imagine we will look to get him out again a bit later in the summer. I am just very grateful that he is fine.

Sunday (22 April) was a very busy day for us, with plenty of runners at Wincanton and one at Stratford. High Noon is still a big raw baby and won’t be seen to his best effect until he jumps a fence. He got interfered with when a horse fell in front on him, which stopped him in his tracks. I feel a summer of grass will be the making of him and I look forward to seeing him over a fence next season. Water Wagtail also had his first start for a while in a handicap chase. He jumped as ever very well, but I think just needed it slightly, having not run for a bit. He is worth his weight in gold around the yard and we all breathe sighs of relief when he comes home safe and sound ready to lead the schooler’s and naughty ones around the place!

Blushing Red stepped up on his first run jumping very well and settling if not perfectly definitely better than on his hurdling debut. He is learning all the time and another we should have some fun with over the summer months. We were perhaps a bit disappointed with Irish Prophecy, who had jumped and travelled well through the race, but just kept going rather than quickening. I think because he has such a high cruising speed I’ve been conned by him in to thinking that he’s a two miler, where two and half miles is more his trip. He remains a very progressive horse but one that needs to step up in distance going forward.

The Sweeney started the day the way it should be done, by winning the two-mile five handicap hurdle nicely. We had always thought plenty of this horse, but he just hadn’t been able to quicken at the end of his races on the very soft ground that he had endured all winter. On this better ground he did so nicely and did it well. This horse loves his racing and one I think we will keep going a little bit longer although I wouldn’t say he will necessarily still be racing by mid-summer. Then it was the turn of Buster who is another we have always thought a lot of, and who hadn’t quiet delivered this year so far. Being a half brother to Shotgun Paddy I had put him in the same bracket as him and imagined he would want the same soft ground. In reality his jumping just hadn’t stood the test on that, whereas when he got the security of nicer ground at Wincanton he jumped superbly, travelled very well and although he may have been a shade lucky when The Last But One, who was upsides him fell at the last, he went on to win with ears pricked and has come out of the race in extremely good order. Having finally got his ground and at last worked him out, I think he will be another that will have another run before the end of his campaign.

Having enjoyed lovely ground at Wincanton, poor Newton Abbott did not have the same fate, with the weather gods not being kind to them. At the end of last week, the track was still waterlogged and although it was drying out they couldn’t get the machinery on to it to cut the grass, so it was long, and the ground was unbelievably holding. Therefore, for both Vibrato Valtat and Rooster Cogburn it was definitely not ideal. (23 April). Vibrato just couldn’t get out of the ground to jump the fences, and although he finished a valiant third, it was not his running, and I can only hold the ground responsible for that. To a certain degree Rooster suffered the same fate, although he jumped beautifully, and I can’t wait to get him out again when the ground is in his favour.

It looks like we will have a busy few weeks with still quite a few horses in training, having not had the ground we wanted until now – so onwards and upwards!