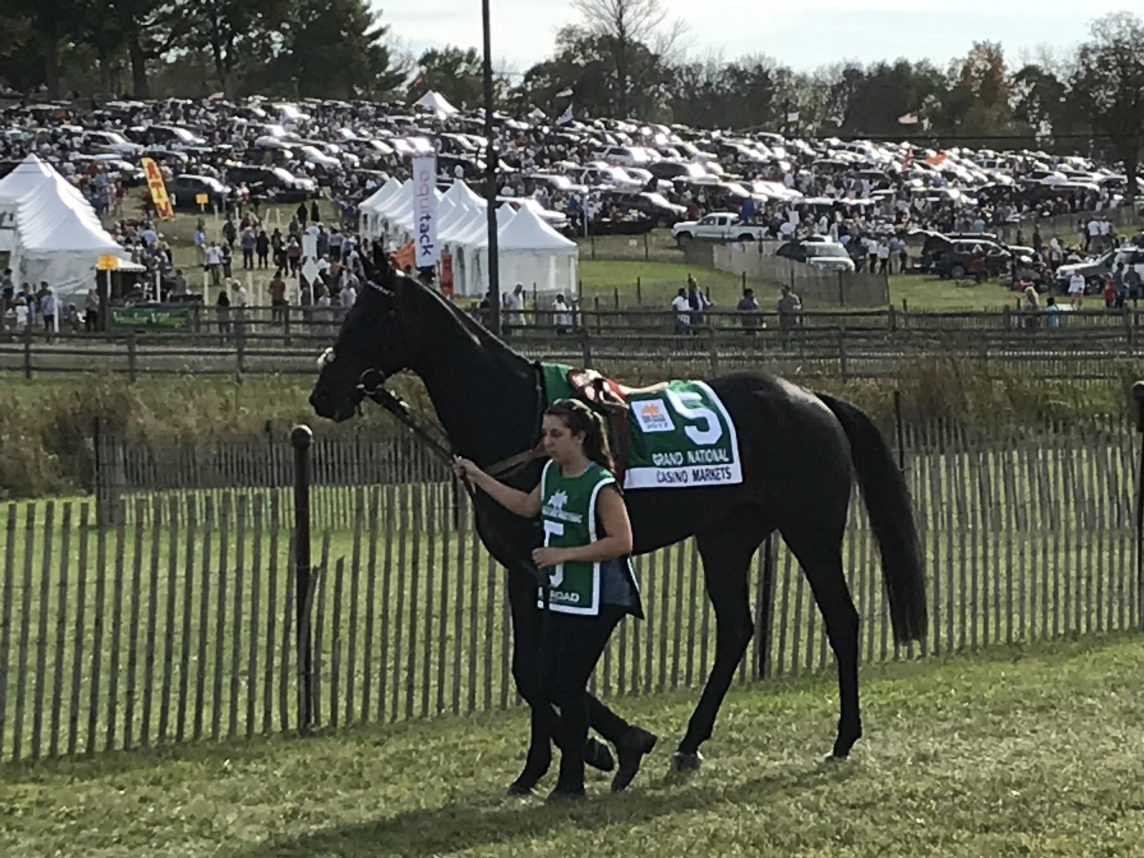 Trans-Atlantic adventures and winning Woolstone One

It has been a whirl wind weekend – departing on Friday night for America but being back in time for lunch at Kempton on Sunday! In the main it is has been a good few days I am very happy with the horses.

Vendredi Trois ran his usual game race at Wincanton (20 October) finishing third. However, he is in the grip of the handicapper at the minute, but none the less he has been giving his owners some consistent fun.

I was also happy with Allez Jacques, who jumped and travelled well also at Wincanton, until pecking at the second last and tiring. He is certainly doing things in a better way this term, having been a bit keen in his races last year, he is now settling, and hopefully will also start to see out his races.

Saturday (21 October) saw Woolstone One making her debut for us at Ffos Las. By all accounts the weather was horrendous there with driving rain and unbelievably strong winds. She was as brave as a lion and battled all the way to the line to win nicely. This was a perfect start and she really is a genuine gutsy filly who will hopefully go onto better things.

Whilst they were getting blown away at Ffos Las, we were basking in 80 degrees plus heat at Far Hills, New Jersey. It was quite an occasion, the race meeting is an extraordinary event, where 40,000 people turn up to a field and pay a huge amount of money for the privilege! Tickets started at $200, with the VIP enclosure priced at $750 per ticket, and all were sold out moments of them coming on sale. The picnics out of the back of cars were something to behold, with kegs of beer equipped with proper pumps, food which could have graced the table of the savoy, and people everywhere!. The jockeys weighing room was a tent, much more akin to point-to-pointing and the horses were also stabled in tents in another field to the side of the racecourse. Considering they were running for $400,000, security was very relaxed to say the least! But this day has the most magical atmosphere, and worth experiencing if you ever get the chance. By all accounts, all the money raised from the ticket sales over the years of this event happening, has allowed a whole wing of a hospital to be built as well as maintain it. So, it is a truly outstanding effort.

Casino Markets looked as though he was feeling the effects of being out there and training and running on quick ground. He was a bit jarred and having jumped and travelled well to a certain point he made one mistake, and Ross Garrity who rode him, felt he was not quite right behind and pulled him up, which was absolutely the right thing to do. Fundamentally, he is fine, but I think he needs to come home and have a good holiday before running back here in the spring. The whole series, has been if not financially rewarding, extremely interesting and great fun and we just need to find the right horse for it. I take my hat off to Stuart and Chrissi Halpern who are the most supportive owners and hopefully they will be rewarded next time.

We caught the 9pm flight out of Newark on Saturday evening to land in time for breakfast at Heathrow on Sunday morning. This was followed by a quick change and lunch at Kempton, and De Rasher Counter’s debut for us over hurdles. He really is a super horse, he jumped beautifully and travelled well and just tired over the last to be beaten two lengths finishing in third. I think this horse has a big future, ideally running on ground with more cut and ultimately over fences, but he has more than enough ability to win over hurdles first.

I hope it will be busy and successful week ahead runner wise, and as ever we will keep you updated!