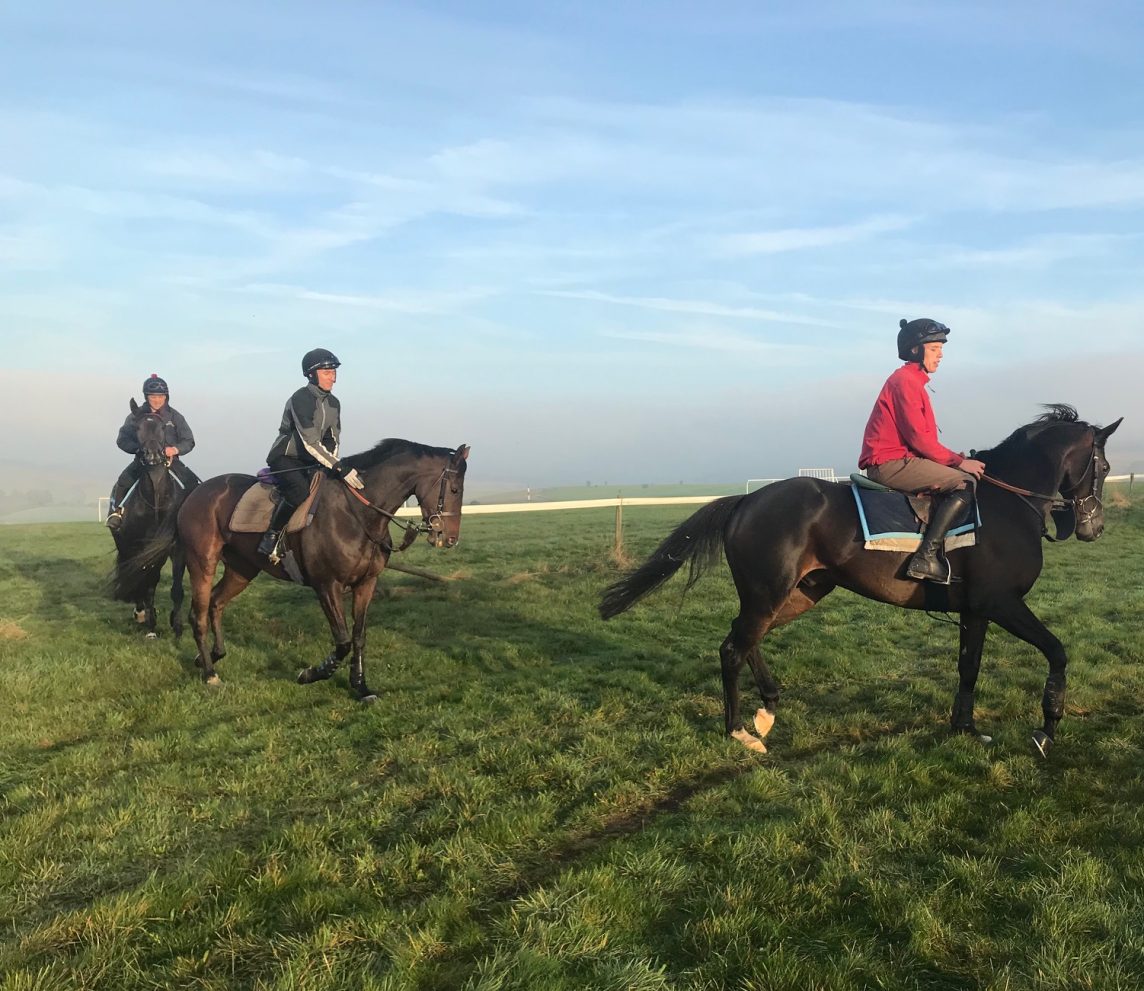 It must be said that farmers and racehorse trainers are the two groups of people that spend more time talking about the weather than anyone else, and as nice as this warm Autumn sunshine has been, consistent rain is really what we need.  There has been some unbelievable deluges, but it has just not been enough to make the ground soft in relation to what the winter horses need.  We are now very close to the last quarter of October, and another ten-day forecast of dry weather is not what the doctor ordered. I am hoping by the end of this month things will start to change and we can get some of our lovely winter horses out on the track.

However, our better ground horses have been flying the flag in no uncertain terms and I have been delighted with how so many of them have run.  It was fantastic for my father and John Crook to see Blushing Red get his beautiful orange and white body home first at Ludlow (10 Oct).  I’ve said it before, but Ludlow does deserve huge amounts of credit for producing such fantastic prize money year on year and we were delighted to take a nice chunk of it home.  Blushing Red is the most striking horse, bright orange in colour with white everywhere including his stomach, and he’s become a real yard favourite as not only is he stunning to look at, he is full of character. There was much celebration following his victory and hopefully he can continue to build on that performance.

Dissavril on the same day went to Southwell, where the ground was beautiful, and they’d done a really good job.  However, she possibly showed the effect of not being able to school on the grass at home, as although in the main she jumped well, she could have been a lot slicker.  She was so impressive when winning her Listed bumper on heavy ground at Market Rasen last season, and it was far removed running over two miles on good ground at Southwell – she just looked tapped for toe in those conditions last week.  She was also a little keen in the early part of the race and when they quickened from the front up the straight, she could not get there.  She’s come out of the race very well and although I wouldn’t be averse to running her over two miles again it would have to be on softer ground or on a more galloping track, and hopefully by then we will have been able to do more schooling on grass.

The following day saw the debut of Majestic Moll over fences at Worcester.  She was like a bunny rabbit, never missing a beat and won the mare’s novices chase in emphatic style.  It was a lovely start for her over fences and if the ground remains as it is I expect we will get her out again soon as she is one that loves to hear her hooves rattle.  I hope at some stage we can get some black type for her as she has a lovely pedigree and ultimately will head off as a broodmare.

Our Bonita Racing Club horse – Freedom Run, also ran in the bumper and finished fourth.  She looks like she wants a trip and over hurdles and possibly a bit more juice in the ground, she travelled well through the race and quickened up the home straight, but just couldn’t quicken again.  She’s come out it well and will now go hurdling, which I am really looking forward to.

Shirrocan Roll also ran a stormer on the same day.  His jumping was much slicker, and he continues to show huge amounts of enthusiasm at the races, sometimes a little bit too much on occasions (!). He galloped all the way to the line to finish second to a horse with much more age and experience than him, and they pulled along way clear of the rest of the field.  I feel he is an exciting horse for the future.

We have now run a couple of the novice chasers in Enniscoffey Oscar and De Rasher Counter.  They too have probably shown a little of the effects of not being able to school on grass.  De Rasher Counter ran a cracker to finish third at Uttoxeter (7 Oct), but was just a little bit big over some of his fences.  Although he was very sure on what he was doing, he will get better and I can’t wait to get him out again. He handles any ground apart from extremes and I’d be disappointed if he didn’t go very close.

Enniscoffey Oscar ran at Chepstow (14 Oct) and just scared himself at the second where he really let fly at the fence.  He then jumped out to his right, never ideal on a left-handed track, but did run incredibly well to stay in contention turning for home after giving away some ground by his drifting.  He has come out of the race well and will have another couple of schools before he goes back over fences, where we will go the other way to help him.

We are going to be governed by weather conditions as to where we go with a lot of the horses that are ready to run.  I’m pleased to report that Javert has come out of his race extremely well and I just don’t think I can’t keep him ticking over until the November meeting at Cheltenham.  All things being well he will head to Aintree for the Old Roan Chase where I hope he can continue his upward trajectory.

We’ve got plenty of entries coming up, but things are going to have to soften up for many of them to take their chances – here’s hoping!