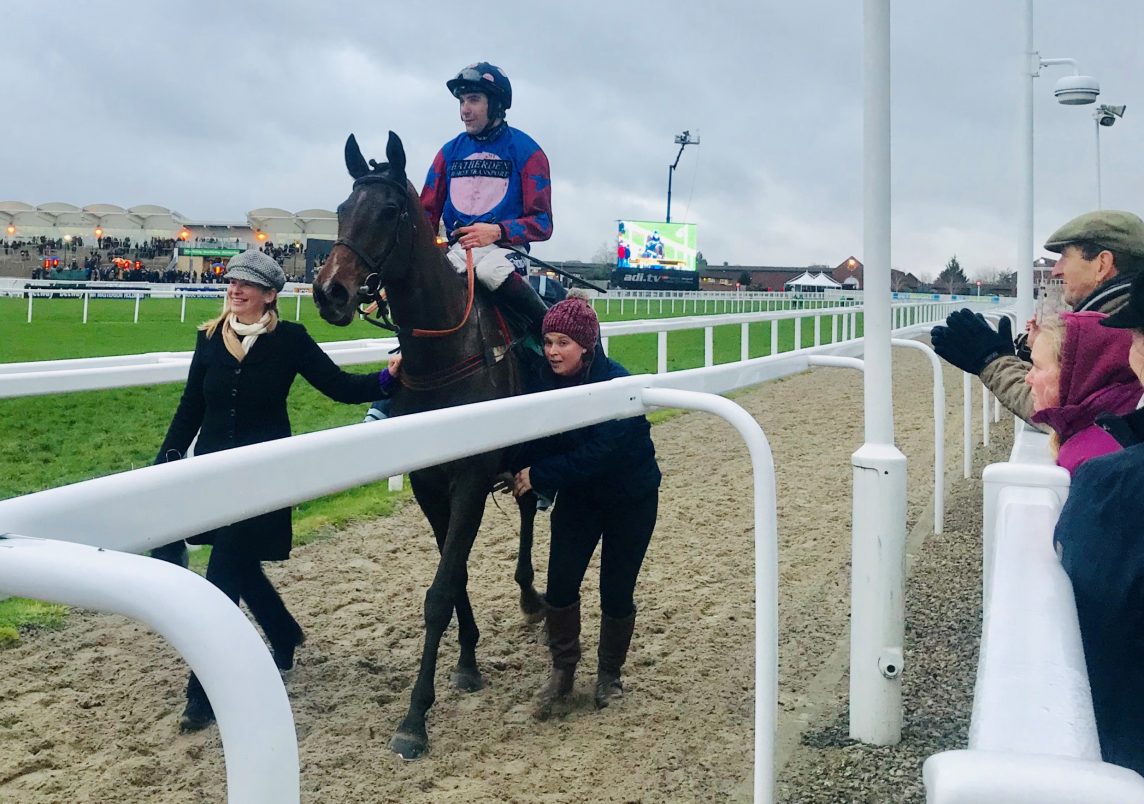 Wow what a January it has been! It’s been emotional, but for once in a really good way.

To see Closing Ceremony winning at Haydock (19th January) was probably one of the most moving races of my training career so far.  He has had a catalogue of issues and is owned by the most patient owners, Paul and Alan Weston.  They have given him time, time and more time, and what made the win even more poignant is that Paul is going through treatment for aggressive lung cancer and so if ever there was a pick me up needed, this was the best that could happen.  Both he and Closing Ceremony are proper little fighters, and now that one has got to the winning post, I am sure the other one will too.  Closing Ceremony is a joy to watch – he is so honest, his jumping is exceptional and he corners round Haydock like a motorbike – what a horse!

Paisley Park has just been magical, and he has done nothing but improve and improve all season and has given us the most unbelievable thrills.  For his owner Andrew Gemmell, blind since birth, it has been amazing and the publicity has been fantastic, he is a great man and we are all loving the journey.  Barry has been brilliant preparing Paisley, riding him every day and producing him just right on each four occasions this season – now he has the big one – the Stayers hurdle at The Cheltenham Festival – so no pressure on him! Laura Scrivener who looks after him has not only been with him for each of his outings but has also been cleaning up with the best-turned outs – who says if you win the best turned out you don’t win the race?! He has come out of Saturday’s race at Cheltenham (26 January) unbelievably well and when Barry gave him his first canter back he said he didn’t feel like he had been to the races at all – and to be honest looking at those ears on the run in I am not sure Paisley thought he was at the races either!

Others in yard have been flying the flag as well.  Tierra Verde won at Taunton (9 January) and backed it up with another good run finishing third in a better-looking race at Kempton (28 January).  She is a lovely looking mare with a great attitude and will certainly jump a fence in time.

Fox Appeal has also been super.  He and Paddy Cowley have found a great bond, and if only he had jumped the way he did at Taunton (9 January) in all his other races previously we might have had many more wins in the bag.  It was a joy to watch the pair and he heads back to Taunton next week where I hope he will be able to get another win to his name.

Down The Highway also ran a blinder at Chepstow (18 January).  After disappointing at Sandown before Christmas, he came home and just wasn’t right and had a bit of a snuffley nose, however, he recovered well and then ran an absolute stormer.  He is a gorgeous horse with a big future and will definitely go chasing next season.  If this snow doesn’t get in the way, he will go to Newbury next weekend and run in the 3 mile handicap hurdle and if that goes to plan, next stop Cheltenham…

Viva Vittoria backed up her run at Plumpton when finishing second at Warwick (21 January) behind a descent mare and she is sure to win her races going forward.  Dollnamix (Taunton 19 January) and De Rasher Counter (Chepstow 18 January) were others who filled the runners-up spot but ran extremely well in doing so.  De Rasher Counter just keeps growing in confidence and is another with a big future.

It was also nice to get some of the youngsters out on the track.  Namib Dancer ran a race full of promise in his first bumper at Newbury (16 January), as did Shang Tang who finished third in a descent bumper at Exeter (20 January).

As I said it has been a great month and hopefully a stepping stone to even better things.